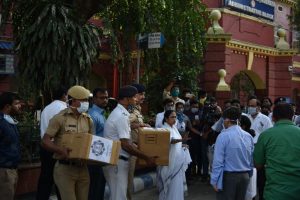 Newspapers face an uphill task to maintain its readership index as India goes for a complete lockdown till the middle of April because of pandemic COVID-19 outbreak. A shutdown that initially prevented the vendors to deliver newspapers at their doorsteps of buyers and the rumour that the paper  itself can carry the novel corona virus forced many publishers to drastically reduce their circulation figures.

There was a rumour on social media during the nationwide lockdown due to the corona virus  and it hit the newspapers hard. While people were afraid of taking newspapers, the hawkers were unwilling to distribute these,  leading to suspension of publication in different parts of the country.

It was at such a crucial juncture that the West Bengal Chief Minister Mamata Banerjee played an important role. On learning that Hawkers Union was not picking up the newspapers,   the Chief Minister took the full report and went live on electronic media and said, “I have received information that many hawkers are not picking newspapers. I would like to tell them that newspapers have been given exemption  in this emergency situation.

The people needed access to newspapers. People also have to read newspapers, how else will they come to know about anything on a day-to-day basis?”.  The police administration has been asked to cooperate fully. The next day the Chief Minister again said that you read the newspaper for all the correct news.  Her message was like ‘Sanjeevani’ for the media. When this message reached the hawkers and the common people, the hawkers also started coming back to their work and the newspapers continued with their regular publication. Gradually, the situation became normal, otherwise for a day or two the situation had become such that some small newspapers had stopped publication while one big newspaper also went without publishing for two days at a stretch.

As the China originated deadly virus started smashing almost all the countries on the planet resulting in affecting over a hundred thousand people and casualties up to few thousands, Prime Minister Narendra Modi came to front to lead the fight against the deadly virus. Modi in a televised address to the billion-plus nation on 24 March 2020 declared a total shutdown to break the chain of infection so that the spreading of COVID-19 can be prevented.

As the pandemic infected over 900 Indians with nearly 20 casualties, its immediate impact was observed over the circulation of newspapers in Mumbai as the vendors ceased to work  because of COVID-19 outbreak.

Managements of all print media houses after a meeting with Brihanmumbai Vruttapatra Vikreta Sangh resolved to suspend publications till 30 March. The decision finally resulted in no newspaper day for the residents of Mumbai as well as Thane, Pune, Nagpur etc.

However, managements of The Times of India, The Indian Express, The Hindu, Hindustan Times, Mid-Day etc made it clear that even though no physical editions would hit the stands on account of the new-found restrictions their newspapers would be thoroughly available in the internet. Acclaimed news magazine Outlook also suspended its print edition pushing its digital edition available to nurture the need of readers.

After Mumbai, it was the turn for hundred thousand residents of Bangalore, Hyderabad along with Guwahati, Imphal, Agartala, Aizawl in northeast India to miss their favourite morning newspapers as the local distributors decided to suspend their works because of the virus outbreak. Guwahati newspaper-hawkers’ association, Manipur hawkers’ association, Tripura and Mizoram based newspaper vendors separately came out with the resolution that they would not distribute the newspapers for some days.

The region witnesses the publication of over 50 morning dailies in different languages including English, Hindi, Assamese, Bengali, Boro, Meitei, Karbi, Khasi, Mizo, Nagamese, Nepali, etc. Few viral posts on social media indicating the newspapers as a potential career of corona virus created panic to the newspaper agents and hawkers along with other media employees. Even many apartment societies and families prevented the vendors delivering newspapers to them.

World Health Organization (WHO) has, however, asserted that newspapers  are still safe to touch by anybody even though the corona virus can live on some surfaces for several days. The papers used in print media outlets are produced in highly automated mills and the process hardly needs human hands. Moreover, the likelihood of an infected person contaminating commercial goods is low and the risk of catching the virus that causes COVID-19 from a package that has been moved, travelled, and exposed to different conditions and temperature is also low, it added.

But reports relating to suspended publication of physical editions because of COVID-19 started pouring from different parts of the globe. From Sylhet (Bangladesh) to Colombo (Sri Lanka), Rabat (Morocco) to Rome (Italy), Vatican City to Jordan, Oman, Yemen capitals along with American cities like Pittsburgh, Seattle, Missouri, West Virginia, Lewisburg etc witness the temporary suspension of newspaper productions. Those media outlets have already committed for entering into the digital platforms completely.

The largest democracy in the world today supports over 82,000 registered newspapers with a cumulative daily circulation of 11 crore estimated to be a Rs 32,000 crore (5 billion USD)  industry. As India has been improving its literacy rate up to 75 percent, more citizens now develop the capacity and resources to access newspapers and digital forums. More middle class Indian families now start using the internet for various activities for the first time in their lives.

Prior to declaring the 21-day nationwide lockdown to fight against COVID-19, Modi interacted with some selected media barons in the country and received suggestions from them over the issue. It is quite amazing that Modi did not organize such interactions with news media owners prior to the shocking announcement of demonetisation (2016), abrogation of Article 370 from Jammu & Kashmir (2019) and paving ways for the citizenship amendment act 2019.

Even Indian Union information & broadcasting minister Prakash Javadekar commented, “Do not believe in the rumours. You will not get infected by reading newspapers. There is just one rule to follow- wash your hands after doing any work.” A former journalist Javadekar asserted that newspapers have tremendous credibility and those can play a constructive role in the time of crisis. Understanding the heat of changing social engineering, various print media houses opted for boosting their presences in the digital media.

As millions of Indians now start using smart phones with internet connectivity, the media owners come to the realization that they would now prefer to get all necessary and almost free news contents from the digital platforms rather than paying for newspapers or even news channels. So the advertisers have also substantially shifted their focus to the digital media space.

It needs not to be reminded that a newspaper in India is sold in the market at a lower price than its actual cost. The deficit (also profit) is managed by the commercial advertisers. They want a newspaper to reach more people (with a price or even without it) so that their products get necessary visibilities. Minus circulation, the advertisers would not support the newspapers anymore. So no distribution of newspapers (even it is duly published) simply means low advertisement flow for print media outlets.

The situation can emerge alarming for regional newspapers like those published from Guwahati, Imphal, Agartala, Aizawl etc, as the owners may not be able to sustain their publications for a longer period. It would directly impact the employees including thousands of  scribes in the region. A number of media bodies came out with statements against the rumour that newspapers can carry the corona virus. They also appealed to the governments to support the media houses to deal with the situation.

A host of Guwahati based media houses including Asomiya Pratidin, The Assam Tribune, Dainik Janambhumi, Niyomiya Barta, Dainik Asom,  Amar Asom, Purbanchal Prahari, Sadin, The North East Times, The Meghalaya Guardian etc made a collective statement   that there is no scientific proof for newspapers carrying the corona virus to the readers. The managements also asserted that a section of electronic and social media outlets spread the unauthenticated news.

But countering it, many social media users put a harsh question to those media houses if  they could assure their valued readers of authenticated, credible and balanced news here after ! The world would return to normalcy fighting against COVID-19 in some day, but will the traditional media houses in the region ever get its dedicated readers back in the post-corona era, a difficult question to be answered indeed !!

*The author is a northeast India based media activist