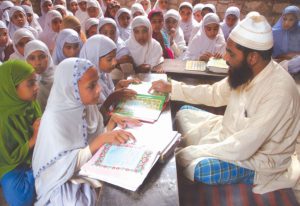 Taking a cue from the Prime Minister Narendra Modi when he tried to dispel apprehensions about Citizenship Amendment Act (CAA) and the National Register of Citizens (NRC), the Ministry of Minority Affairs has come out with its Year Ender-2019 explaining what the government had done for the minorities’ particularly Muslim community.

Under the programme to connect Madrasas with formal education, more than 750 teachers including large number of women teachers, from Madrasas from various states have been trained by the Ministry of Minority Affairs this year so that these teachers can impart mainstream education to Madrasa students across the country.

Naqvi speaking on the subject said, “besides traditional teachings in Madrasa, Urdu, Arabic and other languages, Madrasa teachers are also being provided training for mainstream formal education like Hindi, Maths, English, Science, Computer, regional languages etc. These teachers are being provided training from reputed institutions of the country such as IIT, Aligarh Muslim University, Jamia Millia Islamia, Jamia Hamdard, Anjuman-e-Islam, Amity University and other reputed educational institutes”.  About more than 650 school dropout the Ministry has also provided students bridge course in 2019 so that these students can continue their higher studies or go for a job.

More than 1,25,000 youths belonging to Minority communities were provided job-oriented skill development training through various schemes such as “Gharib Nawaz Employment Scheme”, “Seekho aur Kamao”, “Nai Manzil”, “Usttad”, “Nai Raushni” in 2019. The Ministry of Minority Affairs has decided to organize 100 “Hunar Haat” in the next five years across the country to provide market and employment and employment opportunities to master artisans, craftsmen and traditional culinary experts. First “Hunar Haat” of the government was organized in Jaipur from August 24 to September 1, 2019.

Thousands of master artisans, craftsmen, including large number of women artisans and people associated with them were provided employment and employment opportunities through “Hunar Haat” in 2019. The Ministry of Minority Affairs has also sanctioned 100 “Hunar Hubs” in different parts of the country in the first six months of the government.

Training is being provided to master artisans, craftsmen and traditional culinary experts according to modern needs in these “Hunar Hubs”. More than 2 lakh 65 thousand artisans and craftsmen and people associated with them have been provided employment and employment opportunities through “Hunar Haat” in the last about two years.

Under “Pradhanmantri Jan Vikas Karykram” of the Ministry of Minority Affairs, 104 Common Service Centres have been approved across the country in the first six months of the government. These centres will work as a single-window assistance centre for the needy people to provide information regarding Central Government and State Governments schemes as well as to assist them in getting benefits of these welfare schemes.

India has become the first country in the entire world, which has made the entire Haj 2020 process 100 per cent digital. Online application, E-Visa, Haj mobile app, “E-MASIHA” health facility, “E-luggage pre-tagging” providing all information in India itself regarding accommodation/transportation in Makkah Madinah have been provided to Indian Muslims going for Haj.

For the first time facilities have been provided for digital pre-tagging of baggages of pilgrims. This will ensure the Indian pilgrims will get information in India itself about building along with the room allotted to the pilgrims and transportation like details of bus to be taken by the pilgrims after reaching to the airport in Saudi Arabia. Even SIM card has been linked to mobile app, which will ensure Haj pilgrims immediately getting all the latest information regarding Haj in Makkah-Madina on their mobile phone.

This year, a 100-line information centre has been established at Haj House, Mumbai for providing information regarding entire Haj process. While on one hand health card is being provided to Indian Haj pilgrims in the country, on the other hand “E-MASIHA” (E Medical Assistance System for Indian Pilgrims Abroad), an online system to create and maintain the complete health database of Indian pilgrims along with doctors’ prescriptions, medical treatment as well as medicine disbursals, has been developed to deal any emergency in Makkah-Madinah.

A record number of two lakh Indian Muslims including 48 percent women Haj pilgrims performed Haj in 2019 in first six months of the Modi Govt-2, that too without any subsidy. As many as 2340 Muslim women also performed Haj this year without “Mehram” (male companion). The minister claimed that two lakh Indian Muslims will go for Haj 2020 from 22 embarkation points across the country. One new embarkation point will be opened for next Haj- Vijayawada (Andhra Pradesh).