The Nepal Government has decided to ban the use of Indian currency notes above Rs 100 in the country.  The decision was taken at the Cabinet meeting, Minister of Information Gokul Baskota announced on Dec 13.

The Nepal government’s move can affect the Indian tourists visiting the country and Nepali people working in India.

People had been using the new notes in Nepal for the last two years.

Nepal allows the use of the Indian rupee in its economy and was impacted by the Indian Government’s demonetization move in November 2016. 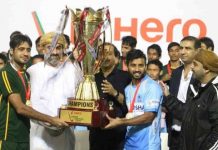