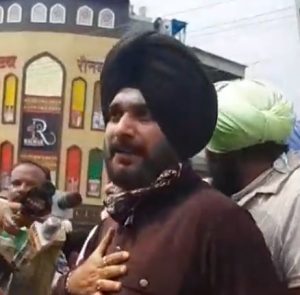 Senior Congress leader Navjot Singh Sidhu is back in the action after a year. Sidhu led a protest march in Amritsar on Wednesday against the Centres’ farm bills.

Along with a large number of Congress leaders and farmers, Sidhu today sat at the hall gate of Amritsar and raised slogans against the Modi government. He also led a protest march against the agricultural bills from Amritsar’s Bhandari bridge to Hall Gate.

Taking to the microblogging site, Sidhu had earlier attacked the Modi government, in a tweet he said, “Black bill passed, paving the way for capitalists’ earnings. Thorns in the path of farmers, flowers in the path of capitalists. You will have to pay a heavy price for this mistake.”

“Farmers are the soul of Punjab. Wounds of the body heal, but not of the soul. Attack on our existence is not tolerated. Punjab, Punjabiyat and every Punjabi are together in this with the farmers,” Sidhu said in another tweet.