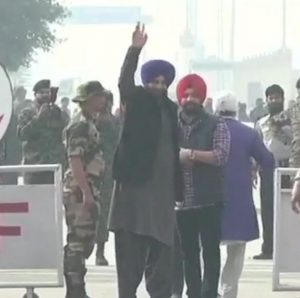 Sidhu was invited by Pakistan Foreign Minister Shah Mahmood Qureshi for the ceremony. Besides Sidhu, two Union minister – Harsimrat Kaur and Hardeep Puri will also attend the ceremony on behalf of the Government of India.

The foundation stone on the Pakistani side of the corridor will be laid by Pakistan Prime Minister Imran Khan on November 28.

Pakistan government on November 23 had also extended invitation to Minister of External Affairs Sushma Swaraj and Punjab Chief Minister Amarinder Singh. However, the invitation was declined by them.

The decision to build passage from Dera Baba Nanak in Gurdaspur district to the International Border was taken by the Union Cabinet on November 22.

Gurdwara Darbar Sahib Kartarpur in Pakistan is located across the river Ravi.