The National Conference on September 5 said that it will boycott the upcoming panchayat and local body polls in Jammu and Kashmir unless the Centre and state government clear their stand on Article 35 A, which provides special rights to the restive state’s citizens.

NC president and former chief minister Farooq Abdullah said, “The core group (of NC) unanimously decided that the National Conference will not participate in these elections unless and until the government of India and state government clear their position in the regard and take effective steps for the protection of Article 35A in and outside court, the NC will not participate in the elections,’’

Party president Abdullah said that the decision of the state administration to hold urban local body elections and panchayat elections was taken in a “hurried manner” and without taking into consideration the prevailing situation “created by the powers that be by unnecessarily fiddling with Article 35-A”.

“The role of central government and present dispensation in the state before the Supreme court is against the wishes and aspirations of the people of the state,” Abdullah added.

The State Administrative Council, headed by Governor Satya Pal Malik, on August 30 announced the schedule for local body polls as well as Panchayat polls. Local body elections in the state will be conducted in four phases between October 1, 2018 and October 5, 2018.

Meanwhile, elections to Panchayats will be conducted in eight phases between November 8, 2018 and 4th December, 2018. 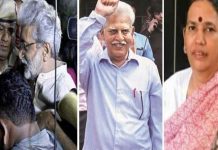