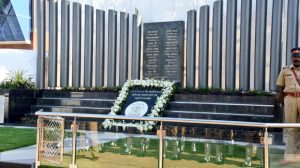 Floral tributes were paid to those who laid down their lives while fighting Pakistani terrorists who had attacked the metropolis on this day 10 years ago.

Prime Minister Narendra Modi paid tributes to those who lost their lives in Mumbai terror attack.

“Tributes to those who lost their lives in the gruesome 26/11 terror attacks in Mumbai. Our solidarity with the bereaved families. A grateful nation bows to our brave police and security forces who valiantly fought the terrorists during the Mumbai attacks,” Modi tweeted.

Maharashtra Chief Minister Devendra Fadnavis paid homage at the Martyrs’ Memorial Gymkhana, on the 10th anniversary of the 26/11 Mumbai attacks.

Family members of the policemen who lost their lives during the attacks were also present at the ceremony.

Congress took to its twitter account and tweeted: “10 years ago, we showed the world that divisive forces cannot break the unity and solidarity among our people. Today, we honour those who lost their lives in the 26/11 Mumbai Attacks.”

On November 26, 2008, Pakistani terrorists sailed into Mumbai and carried out attacks that lasted three days. The terrorists opened fire indiscriminately at people killing 166 and injuring several others.