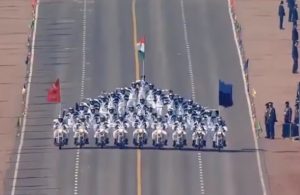 The Republic Day Parade Ceremony was commenced after Prime Minister Narendra Modi paid homage to the martyrs by laying a wreath at the Amar Jawan Jyoti under India Gate. An eternal flame burns at the Amar Jawan Jyoti to commemorate the indomitable courage of our Armed Forces personnel who have made the supreme sacrifice in the service of the motherland. It is symbolized by a reversed rifle standing on its barrel and crested by a soldier’s helmet.

This year all women marching contingent of the Assam Rifles took part for the first time. Major Khusboo Kanwar lead the contingent. The ‘Sentinels of the North-East’ took an active part in all pre and post-Independence wars. The ‘Friends of the Hill People’ are also custodians of law and order and guardians of our borders. They were effectively involved in counter-insurgency operations in Jammu and Kashmir. Raised as the ‘Cacher Levy’, the force completes 183 years of glorious service to the Nation.

As per tradition, after unfurling of the National Flag, the national anthem was played with a 21-gun salute.

Twenty-two tableaux, comprising of 16 from different States and Union Territories and six Ministries, Departments and other institutions displayed life, times and ideals of Mahatma Gandhi.

Twenty-six children including six girls and 20 boys Awardees of Pradhan Mantri Rashtriya Bal Puruskar 2019 for their exceptional achievement also graced the occasion. The awards have been given to children for their merit in the fields of innovation, scholastic, sports, arts, culture, social service, music, bravery or any other field which deserves recognition.

Corps of Signals Motor Cycle Team saluted the president with daredevil acts in the Parade under the dynamic leadership of Captain Manpreet Singh, who saluted smartly from a 12.5 feet ladder. This is the first time in the history where he beat his own record of saluting from a ladder of 8ft.

The grand finale of the parade was the spectacular flypast by the IAF.

Five Jaguar Deep penetration strike aircraft, in ‘Arrowhead’ formation did the flypast. Following the Jaguars were five MiG-29 Upgrade Air Superiority Fighters in ‘Arrowhead’ formation. Three state-of-the-art, SU-30 MKIs of Indian Air Force executed the Trishul maneuver. The culmination of the parade was by a lone Su-30 MKI, which flew at a speed of 900 km/hr and splits the sky with a ‘Vertical Charlie’ maneuver over the saluting dais.

The ceremony culminated with the national anthem and release of balloons. 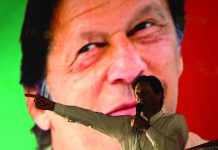