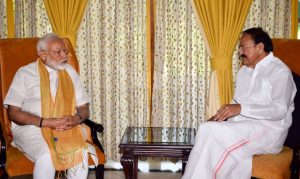 Naidu’s office tweeted, “Shri Narendra Bhai Modi ji called on me today morning. Greeted him on being elected as the leader of NDA and the next Prime Minister. Over breakfast, we discussed many issues including accelerating development and strengthening Parliamentary institutions.”

On Saturday Modi was unanimously elected as NDA parliamentary party leader at a meeting attended by its newly elected MPs and senior leaders in the Central Hall of Parliament.

In the general election, the BJP-led NDA won 353 seats out of 542 and the Congress faced an epic failure with just 52.