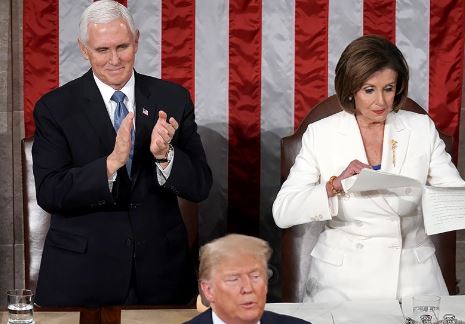 Top US Democrat Nancy Pelosi tore in half a copy of Donald Trump’s State of the Union address on Tuesday given to her by the President just as he concluded his remarks.

When asked after the event why she ripped up the speech, Pelosi replied to reporters,”because it was a courteous thing to do considering the alternatives.”

This all started when President Trump snubbed a handshake offer from the Pelosi, the House speaker when he arrived to deliver the address.

Pelosi took to her twitter account and wrote, “Democrats will never stop extending the hand of friendship to get the job done #ForThePeople. We will work to find common ground where we can, but will stand our ground where we cannot #SOTU.”

The White House responded to Pelosi’s decision to tear the speech, claiming that her legacy was now tied to ripping up the things President Trump mentioned in the address, such as one of our last surviving Tuskegee Airmen.

President Trump avoided the subject of his impeachment in the early portion of his speech.

Republicans from both houses of Congress chanted ‘four more years’ as the President stood at the lectern in the chamber of the House with a presidential election almost nine months away.

President Trump welcomed Sgt. Townsend Williams of North Carolina back from Afghanistan. He walked into the chamber to be reunited with his wife, Amy, and their two young children.

“Amy Williams is a military spouse and mother of two young children. She works full time and devotes hundreds of hours to helping military families, all while raising her two children as her husband serves his fourth deployment. Their family was reunited tonight at #SOTU,” The White House tweeted.