Former Uttar Pradesh chief minister and Bahujan Samaj Party (BSP) supremo Mayawati on Tuesday justified her life-size statues built across many cities in the state, saying it represented the “will of the people”.

Submitting her affidavit in the top Court, Mayawati said that during her tenure as chief minister, the state legislature sought to pay tribute to her for her tireless work for the welfare of Dalits by getting her statues installed. “How could I defy the will of the state legislature,” she said.

“The state legislature had shown respect to a Dalit woman leader,” she added.

The BSP supremo also cited similar exercise carried out by Congress, BJP and other political parties in erecting statues of their leaders at the expense of public money.

Mayawati filed her statement in the top Court, which is hearing a petition against the statues of herself and elephants, which are her party BSP’s symbol across many cities with taxpayers’ money.

The court had said it was of the tentative view that Mayawati has to pay back the money as she had spent a lot of public money on installation of many statutes of herself and elephants in UP. 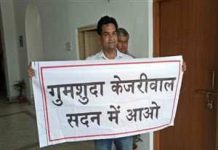