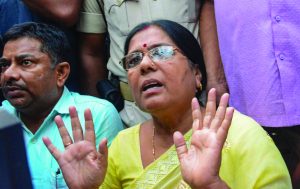 A horrific incident of 34 girls being raped in a Muzaffarpur shelter home run by a local newspaper owner and power broker, Brajesh Thakur surfaced. Accused Thakur was found to be highly connected with considerable clout in the state capital. His call details revealed his close connections with the husband of the state social welfare minister Manju Verma. Verma was shocking. Verma was looking at the shelter homes in the state and her department was responsible for providing funds to the NGOs which run shelter homes across the state.

The incident forced her to step down from her post immediately though Bihar Chief Minister Nitish Kumar tried to shield the minister by saying that there was no question about her resignation. He had political equations in mind because Verma belongs to the caste of Kushwaha and the chief minister was grooming her against his arch rival and Minister of State in the Union Cabinet, Upendra Kushwaha. When the revelations of Verma’s husband receiving regular calls from the main accused came to light, Kumar was left with no option than to ask her to resign.

Muzaffarpur rape scandal has exposed the vulnerability of the state apparatus to manipulations by vested interests that can go to the extent of indulging in heinous crimes of raping helpless poor girls. Some media, as usual, being friendly with the ruling regime didn’t show the anger of the people in Bihar properly.

The fact that a notorious journalist involved in the rape scandal and having access to the top brass in the state capital and being saved even after an adverse report from the Tata Institute of Social Sciences, the third-party auditor of shelter homes in Bihar, is unacceptable to the people. Protests are going on in every part of the state. However, the media supporting the ruling party is largely ignoring it.

In this case, the role of BJP is also important. The party does not want to own up the failures of a governing state. The leaders of the party view this incident as an opportunity to denigrate the chief minister and dethrone him, a desire that has been nursing since long.  Senior leader and former union minister CP Thakur has demanded Nitish’s resignation. Thakur suggested that the minister should not be on the post till the investigations are on. Here, former minister Verma has also warned the chief minister that other leaders involved in the scandal should also be brought to book.

Kumar, expressing remorse said that he is ashamed of the incident. His assertion that it was a failure in the system appears to have some element of truth. But, how can this logic be accepted when he is in the ruling of the state for over one and half decade?

In an attempt to balance the equation which is changing fast in the wake of 2019 elections, the Bihar chief minister installed his confidant and former journalist Harivansh Narayan Singh as the Deputy Chairman of Rajya Sabha. His success in doing so has proved that he has some clout among the non-Congress and non-BJP chief ministers. Orissa chief minister Naveen Patnaik obliged him by supporting JDU candidate Harivansh Narayan Singh despite the fact that he would be facing BJP as its main opponent in assembly and parliamentary elections in his state.

However, this clout will hardly work in the state. His falling image has made him vulnerable to all sorts of bargain in the party and outside it. The BJP is bound to take advantage of his vulnerability. The party is facing difficulty in finalising the candidates of parliamentary elections owing to the demand from JDU for more seats. It is causing irritations to the state leadership which considers the demand as exaggerated. It is the confidant of BJP that they would win the election on Prime Minister Narendra Modi’s image. It hardly matters for the party whether Nitish stays with them or not.

His political rival Lalu Prasad is in jail and Nitish has quelled dissidence within the party. But his calculations are now in jeopardy as he will have to struggle hard to put his development plank on track. This is necessary because he is left with no time to jump into the campaign for 2019 polls. Bihar would be one of the sites where a fierce battle is to be fought. The state is not only important in terms of numbers but also for the political equations that has developed nationally. The Congress led Mahagathbandhan would try its best to capture it. On the other hand, the BJP is trying to repeat its performance of 2014.

This cannot be denied that after a long period of poor governance and anarchic political scenario, Kumar had brought peace and stability. People were tired of the rule of Lalu Prasad. However, Prasad had certainly brought a social revolution by empowering Dalits and OBCs but failed in maintaining law and order. He was also accused of patronising anti-social elements in the state. People give credit to Kumar for the brought the state to the stage where it could join the race of development.

His image as the man of development made him able to win an election in which he had his fierce enemy Lalu Prasad by his side. He had successfully forged a social equation to give the much required stability to the state. Kumar could not continue with the arrangement and deserted the Mahagathbandhan (alliance) that was formed to provide a national alternative to BJP. He himself was being seen as a potential candidate for the post of prime minister.

Nitish Kumar has also effectively put down the fire that had broken out of  Srijan scam which involved embezzlement of huge government funds. The scandal with the patronage of bigwigs and many heads were expected to roll off. However, nothing of the sort happened and Kumar seemed to have controlled the damage. However, the Srijan Scandal severely dented his image.  The scandal reduced Kumar’s bargaining power. He does not have any scope in the opposition camp either because Tejaswi Yadav is completely opposed to his entry in his party. He has asserted more than once that he could not be accommodated in the Mahagathbandhan. Left with only one of option of staying in the NDA, Kumar is trying to influence the equation within the BJP. However, his main supporter in the BJP, Arun Jaitley, is unwell and not being able to do much. By putting Harivansh in an important office, Kumar is hoping to influence the BJP leadership. But these politics may not work because both PM Narendra Modi and BJP president Amit Shah were never comfortable with him. The case of Srijan Scam may also get a hearing very soon. These all will add to another embarrassment to him. It would be difficult for him to maintain the image of Sushasan Babu in such an adverse situation. The 2019 polls may prove to be a nightmare for the Bihar chief minister.