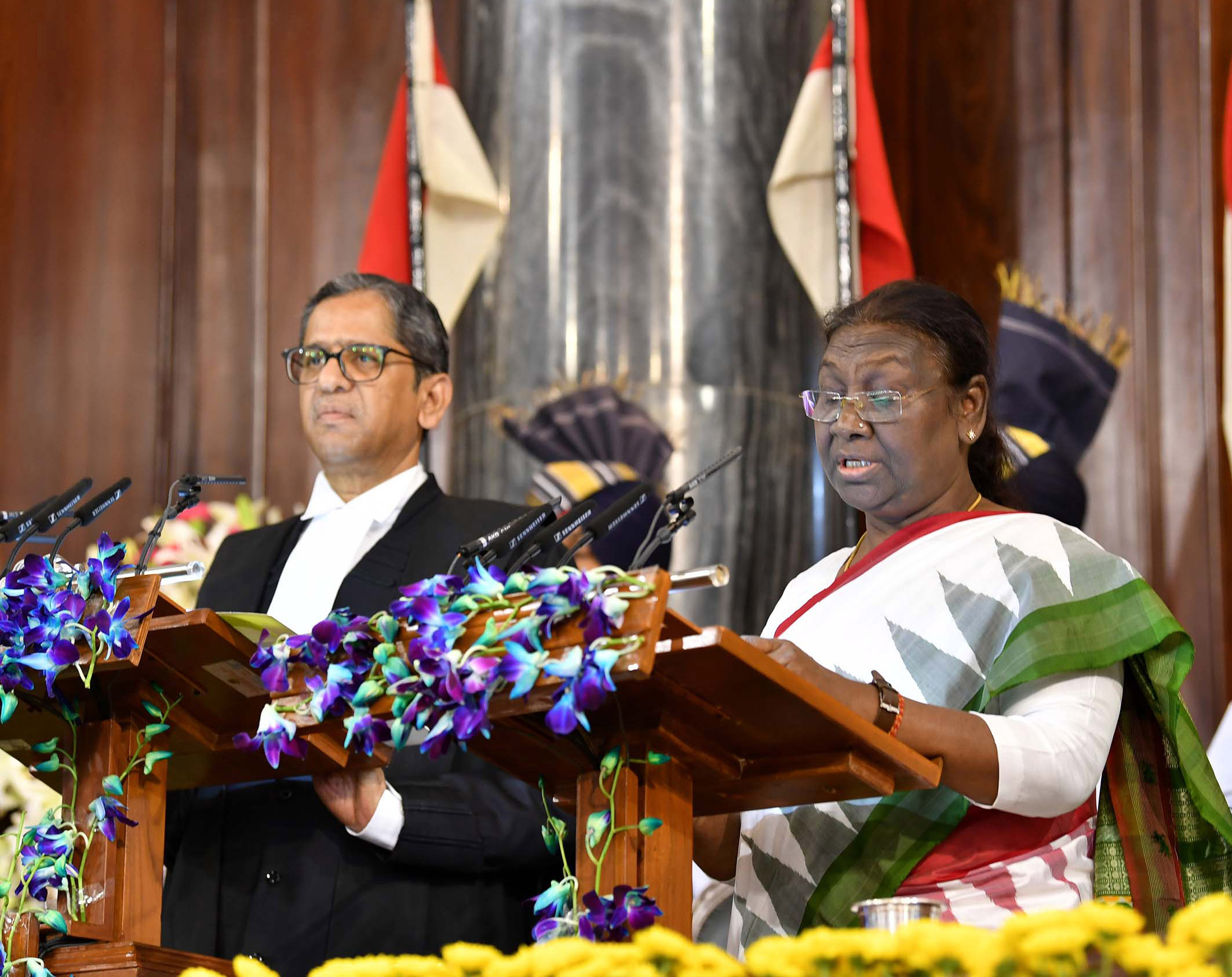 Though the Prez poll result cannot guarantee a smooth sailing for the BJP in 2024 LS polls, the massive cross-voting seen in many states has exposed the façade of the Opposition’s united front narrative against the BJP two years before the General Elections, writes Mudit Mathur

Droupadi Murmu, 64, has won the presidential race for the Raisina Hills. She succeeded strategically planned presidential election with a comfortable majority of 64.03 percent votes defeating opposition’s nominee Yashwant Sinha by a huge margin. Murmu has become the 15th president of the Republic of India with swearing in ceremony held on 25th July in the jampacked Central Hall of the Parliament. She is the first tribal, youngest and second woman to the hold the top constitutional post in the Indian democracy. Distinguished dignitaries including Prime Minister Narendra Modi along with his cabinet, Congress president Sonia Gandhi, BJP leader Murli Manohar Joshi, Odisha CM Naveen Patnaik greeted her after the oath.

The Chief Justice of India N.V. Ramana administered her the oath as the constitutional head  “to protect, preserve and defend the constitution and the law devoting to the service and well-being of the people of the Republic of India.” Down to earth Murmu scripted the history by becoming first president from the deprived tribal community and second woman to make it to the Rashtarpati Bhawan defeating opposition nominee Yashwant Sinha by a huge margin.

The Santhal tribe has glorious role in the freedom struggle and Birsa Munda, whose role in the freedom struggle changed the course of modern Indian history. He mobilised the tribal community against the British, forcing them to introduce laws protecting the land rights of tribals. In his all-too-short life — he died in Ranchi jail at the age of 25 — he brought about inspiring changes in the lives of tribals across the country.

The past precedents suggests that success in presidential election does not necessarily guarantee that the ruling BJP would win 2024 Lok Sabha polls for granted, but lack of unity in opposition camp and leadership crisis within the Congress party over dominance of Nehru-Gandhi family could definitely give an edge to ruling Prime Minister Narendra Modi to make hat-trick amid no alternative phenomena.

However, the presidential election result can hardly be taken as a pointer to possible smooth sailing for the BJP in 2024 general election but much hype of building a fresh narrative of hat-trick of Modi is being created in the media. Congress nominee Shankar Dayal Sharma and Pranab Mukherjee won 1997 and 2012 but the party lost parliamentary polls. So much would depend on how people of India react to the policy reforms taken up by NDA government despite unacceptance of stake holders for the same causing resentment among them. Growing unemployment, price rise, minimum support price for farm produces, privatisation of public sector assets, atrocities on Dalit and traders’ unrest over GST regime are vital issues before the people. It would be interesting to see how Opposition takes up these issues or some new polarisation emerges to channelise this anger.

The BJP has meticulously planned to take its presidential candidate’s victory to masses and has organised celebrations in over one lakh villages of the country. BJP party workers and leaders will also march from its party headquarters to Rajpath to celebrate the election of India’s first Adivasi president. The BJP planned to showcase its concerns for the weaker section highlighting its outreach to get an Adivasi President elected rather than Murmu’s own tough life struggles at grassroots outshining her achievements in the public life.

Murmu has become President at a time when marginalised tribal community in India is expressing deep resentment over the government policies – posing threat to their lives and livelihood. Human right activists have been raising questions over extra-judicial killings during insurgency operations in the tribal areas with tribals facing turbulent times to save their land. As the Governor of Jharkhand, Murmu showed her guts returning two legislations passed by BJP-ruled Jharkhand government purportedly inimical to the interests of Adivasis community saying “injustice will not flow from her pen” but as a top constitutional head, her judicious approach would face larger challenges with respect to protection of forests and saving means of livelihood.

As the first woman Governor of Jharkhand, Murmu courageously retuned two controversial Bills in June 2017 passed by Chief Minister Raghubar Das-led BJP government. The issue was related to amendment in land laws relating to easy transfer of tribals’ land for Industrial use – paving the way for corporate houses to own their land for business purposes and mining. The Chhotanagpur Tenancy (CNT) Act and the Santhal Pargana Tenancy (SPT) Act had sparked widespread protests by tribal communities who believed that the move would limit their rights over their inherited lands. Her past record, considerably inspired confidence in a big chunk of opposition parties who outrightly supported her candidature. Shiv Sena and Biju Janata Dal openly supported her while her victory largely based on the votes of opposition on the ground of conscience.

Murmu conquered her challenger and opposition candidate Yashwant Sinha, securing 64.03 percent of the total votes polled. Her victory exposed hollowness of opposition unity that shattered with huge cross voting ensuring her smooth victory much before the contest. Though NDA was short of majority because of its debacle in many states as compared to 2017 presidential poll and just required 3-4 percent votes to secure victory but final tally of 64.03 percent votes really highlights its admirable strategy which was conceived by Modi-Shah duo dominating national polity.

The operations for the presidential elections began with the engineering of defections in Shiv Sena-led Maharashtra through Eknath Shinde who deceived Uddhav Balasaheb Thackeray pulling down his government with the help of BJP. Besides this backup plan, the overall strategy of Modi-Shah also turned the tables on the opposition. The name of Droupadi Murmu from Santhal tribe saw a huge response from the regional political parties who drew inspiration and hope from her credible struggle for the rights of weaker and tribal sections of the society against powerful lobbies espousing corporate interests.

The BJP claimed that 17 MPs from the two Houses of Parliament and 126 MLAs from different states defied respective party lines and voted for Murmu. Many regional parties, despite their political reservations against the BJP-supported Murm because of her sustained struggle for the welfare of poor, downtrodden and exploited tribal community where she went beyond the party lines to protect their interests.

The election of President of India has always been dominated by the candidate of ruling party and opposition parties never had big role in it. But unlike in the past, opposition failed to pose a respectable united fight because of cracks and divisions among its highly whimsical and overambitious leaders. The main opposition party, the Congress also failed to discharge its responsibilities to take proper initiative for an interactive dialogue process between the leaders of other opposition parties.

Presidential election of 1969 was an exception when official candidate of the ruling Congress party, Neelam Sanjiva Reddy lost the election and an independent candidate V.V. Giri, a freedom fighter and trade union leader, won the battle. It had become a contest between the then Prime Minister Indira Gandhi and the old guards of the Congress Party dubbed as the Syndicate. Disregarding the dissent of then Prime Minister Indira Gandhi, the party officially supported candidature Neelam Sanjiva Reddy. Giri, who was vice president, resigned and decided to contest as an independent candidate. Prime Minister Gandhi then decided to support him, endorsing a “vote of conscience” that allowed Congress legislators in the states and central to vote for Giri.

The unthoughtful strategy of opposition was flawed since the beginning as after refusal of three prominent leaders – Sharad Pawar (NCP), Farooq Abdullah (NC) and Gopalkrishna Devdas Gandhi, former Governor of West Bengal – Yashwant Sinha took the baton of opposition who was once among the top leadership of BJP. Ironically,Yashwant Sinha, who has now raised a rebellion to PM Narendra Modi, has been challenging his decisions before the apex court but he was the same person who proposed Modi’s name for the Prime Ministerial race being the most eligible choice in 2014. Thus, the selection of Yashwant Sinha was marred by intellectual bankruptcy and lack political vision. The ongoing election campaign for the post of Vice President of India between NDA nominee Jagdeep Dhankar and opposition nominee Margaret Alva has just become a symbolic fight amid announcement of Trinamool Congress chief Mamata Banerjee to abstain from polling alleging Congress party decided her name without consultation with her.

Draupadi Murmu was born in 1958, in the district of Mayurbhanj in Odisha. She completed her education at Unit II High School and Rama Devi College, both in Bhubaneswar. She went on to work as a junior assistant in the State Irrigation and Power Department from 1979 to 1983, and then as a teacher at Sri Aurobindo Integral Education Centre at Rairangpur till 1997.

She lost both her two sons Laxman Murmu and Sippun Murmu. Her husband Shyam Charan Murmu died in 2014. She has a daughter Itishri Murmu who works at UCO bank in Odisha. Itishri got married to Ganesh Hembram, who is a rugby player, in 2015. They have a little daughter.

Murmu is a keen practitioner of the meditation techniques of the Brahma Kumaris, a movement she embraced after she lost her loved ones. Around 13 years ago, Murmu first got connected with the Brahma Kumari Sansthan in Mount Abu in Rajasthan.

Murmu first joined politics in 1997 when she was elected councillor of the district board in Rairangpur. She would then go on to become a MLA from the same constituency. Murmu served twice as an MLA and once as a minister in the BJD-BJP coalition government in Odisha, before being sworn in as the Governor of Jharkhand on May 18, 2015. Murmu stayed in the post till 2021 before moving to her village in Rairangpur. Murmu also served as vice-president of the BJP’s Scheduled Tribes Morcha.

Murmu is an inspirational figure for the Santhal community and for women in general. She has frequently weighed in on issues that Adivasis face. Speaking at an international conference on financial inclusion, Governor Murmu said that even though the Jharkhand state government (then headed by the BJP) and the Centre were working to extend the benefits of banking services and other schemes to tribals, the condition of SCs and STs “remain extremely poor”. Murmu also called for the translation of literature on Adivasi languages and culture. 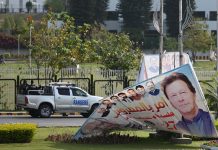