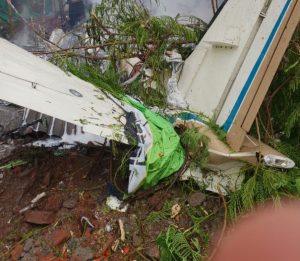 The Ministry of Civil Aviation on June 28 said that the 26-year-old charter plane that crashed in Mumbai killing all four on board and a construction worker on the ground, did not a have certificate of airworthiness.

The ministry said that the aircraft last flew in 2008 when it was with Uttar Pradesh government. It was later bought by M/s UY Aviation in 2014.

The aircraft was in the hangar of a maintenance company, Indamer, for over a year and a half, undergoing major repairs, Anil Chauhan, accountable manager of UY Aviation, said.

“As per the regulatory provisions, before any test flight, a certificate to the effect that the aircraft is fit for flight is required to be issued by the authorised certifying staff of the operator or MRO, ministry further added.

It was its first flight in around nine years, sources revealed.

“The incident could have been averted. Maria had told me that the flight won’t be flown due to bad weather. The aviation company is responsible for this unfortunate incident,” pilot Maria Zuberi’s husband said.

He even accused the aviation company which owned the plane and said that his wife had informed him bad weather had grounded the plane.