A major fire engulfed a forested area of about four kilometres in Mumbai’s Aarey Colony in Goregaon on Monday evening.

The fire, which broke out at around 6:21 pm on Monday escalated to level three blaze by 8:05 pm.

According to Mumbai fire brigade, the fire, which was confined to trees and dry leaves, spread across an area of about 3-4 kilometers.

10 fire engines were pressed into service to douse the flames.

As per the latest report, the fire has been doused. No causalities have been reported so far.

The blaze started around 6:30 pm in an open plot. It started spreading towards residential areas such as New Mhada Colony near New Dindoshi Green Hill Society in Goregaon (East) towards night.

The officer said, “the blaze remained confined to trees, dry leaves within a distance of 3-4 km from the spot of fire till 7.30 pm. But, in the night it started moving towards the residential localities.” 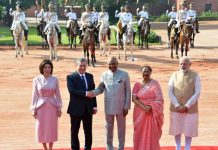