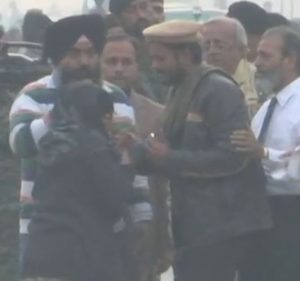 Hamid Nehal Ansari, a Mumbai man who was released from a Pakistani jail after six years for alleged espionage charges, crossed over to the Indian side at the Attari-Wagah border on Tuesday.

He was welcomed by his family members, including father Nehal and mother Fauzia, who were waiting at the border along with a large contingent of India-Pakistan friendship activists and officials.

In Mumbai Bharatiya Janata Party (BJP) activist and former legislator Krishna Hegde, who helped the family in the past few years, expressed happiness on Ansari’s return.

Pakistan had alleged that Ansari, 33, an engineer, was an “Indian spy” who illegally entered the country, and accused him of involvement in anti-state crimes, forging documents, and jailed him.

For the family of Ansari, it was an ordeal since November 2012 when he left the country for Kabul for employment and then was reported “missing”.

According to the reports, he became friendly with a Pakistani girl on social media and reached Kohat in Khyber Pakhtunkhwa to save her from a forced marriage.

Ansari on November 12, 2012, crossed over from Afghanistan border in Jalalabad to Peshawar in Pakistan where he was arrested by Pakistan intelligence.

A military court later, sentenced him to three years in jail. Despite his three-year jail term having ended, he was kept in prison.