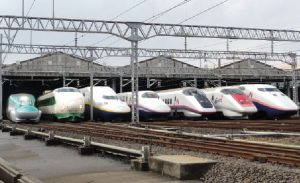 The six new projects for the introduction of high speed bullet trains are Delhi to Varanasi, Delhi to Ahmedabad, Mumbai to Nagpur, Mumbai to Hyderabad, Chennai to Mysore and Delhi to Amritsar. The alignment for these corridors has yet not been finalized, as the DPR study is in progress. The information came to light when the Minister of Railways, Commerce & Industry, Piyush Goyal shared details of six more projects in a written reply to a question in Rajya Sabha on March 13.

However, for the time being the Mumbai-Ahmedabad High Speed Rail Project is under execution and work on it had begun after visiting Japanese Prime Minister Shinzo Abe and Prime Minister Narendra Modi laid the foundation stone for the maiden 508 km long high-speed rail project. This would be mostly elevated corridor between Sabarmati and Mumbai (508 kilometre) with 12 stations.

The bullet train running on this corridor would have a maximum design speed of 350 kilometre per hour and operating speed of 320 kilometre per hour. The journey time between Mumbai and Sabarmati will be 2.07 hrs for a fast train and 2.58 hrs for train stopping at all the stations enroute. Unlike other areas, for high speed, country is getting a cutting-edge technology in totality.

The Shinkansen Technology is known for its reliability and safety and is proven for more than 50 years. The train delay record of Shinkansen is less than a minute with zero fatality. Thus, the project is set to provide reliable and comfortable service with high standards of safety.

The technology regarding disaster predictions and preventions will also be acquired as a part of the project. Such safety systems ensure that the train operation safety is maintained in case of any natural calamity such as earthquake etc.

With the presence and availability of this technology, India will be leapfrog to the cutting edge of latest train developments with passengers able to reach their destination in 2 hours as against the current 7-8 hours by train.

Low cost of the project

Major portions of large scale infrastructure projects are financed by debt, and the cost of debt is a significant portion of the total costs. As a part of cooperation agreement between India and Japan, Government of Japan will provide a soft loan of about 88,000 crores at miniscule interest rate of 0.1 per cent.

The repayment period of the loan is 50 years. Repayment of loan is to begin after 15 years of receiving the loan, making it practically free since, this loan interest works out to roughly 7-8 crores per month. In fact, generally, any such loan even from World Bank or such other agencies costs about 5-7 per cent with a repayment period of 25-35 years, thus India is getting loan for the High-Speed Rail Project at almost zero cost without putting any strain on existing financial resources available with the country, as more than 80 per cent of the project cost is being funded by Government of Japan.

The estimated cost of the project is 1,08,000 crore. Approximately, 81 per cent of the project cost would funded by loan from Government of Japan at a rate of interest of 0.1 per cent with a repayment period of 50 years with 15 years grace period. The project is targeted for commissioning by the year 2022-23. This would coincide with India’s diamond jubilee in 2022 to mark its 75 years of Independence.

The prestigious bullet train is touted to be a game-changer, besides being ‘a symbol of New India’. It offers a huge challenge and opportunity. A National High Speed Rail Corporation Limited (NHRCL) has been incorporated as a Special Purpose Vehicle (SPV) to implement the project. Since October 1964, when the first bullet train was launched, it has emerged as iconic train of Japan. It covers the 582 km between Tokyo and the commercial hub of Osaka in two hours, 22 minutes.

The Japanese bullet train exemplifies engineering efficiency and incredible standards of safety and punctuality as these have carried ten billion passengers sans a single accident or casualty with an average enviable delay of less than one minute. Considering the time it takes to reach the airport and then take a flight and reach the destination, the bullet train would take half the time to reach their destinations.

This Mumbai — Ahmedabad High Speed Rail (MAHSR) project (popularly known as the Ahmedabad-Mumbai bullet train)is a visionary project which will herald a new era of safety, speed and service for the people and help Indian Railways become an international leader in scale, speed and skill. 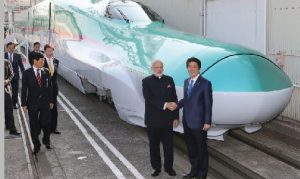 One of the prime objectives of the project is “Make in India”, which is to be realized before commissioning of the project. As per the agreement between Governments, the MAHSR Project has “Make in India” & “Transfer of technology” objectives. Under the guidance of task force (DIPP and Japan External Trade Organization (JETRO), action is being taken as per accepted concept paper guidelines.

On the sidelines of this project, four sub-groups with representatives from Indian industry, Japanese industry, DIPP, NHSRCL & JETRO have been formed to identify potential items and sub-systems for make in India. Active interactions are already taking place between the industries of India and Japan. It is expected that many joint ventures will be formed in the time to come to take up manufacturing of various components including rolling stock. This will not only benefit the Indian industry with new technology but will also create several job opportunities within the country.

The Make in India objective will also ensure that most of the amount invested in this project would be spent and utilized within India. The construction sector in India will also get a big boost not only in terms of investment but also with respect to new technology and work culture.

Officials claim that this project is likely to generate employment for about 20,000 workers during the construction phase, which will be trained specially to take up construction of such projects in India. Some of the new areas where construction skills would be developed are ballast-less track, under sea tunnel etc.

Also as per the feasibility study, the economic rate of return would be around 11.8 per cent. So, economically the project shows a good sign. Savings on account of time, reduction in accidents and fuel — all add up. A lot of traffic from the roads is expected to shift to high-speed trains. As of now the project is economically viable.The overall area gets developed. In addition to the bullet train per se, transit oriented development will happen along the route. A number of hubs will come up.

Virar area will get developed into a major hub, because it will have connectivity with Mumbai with hardly 27-28 minutes distance. Boisar is another area that can come up as another major commercial hub. The project also has an element of Make in India. The industry will benefit because of that as number of joint ventures will take place.

In addition, 300 young officials of Indian Railways are being trained in Japan to give them exposure in high Speed Track Technology. Keeping in view the long-term plan for human resource development, Government of Japan has also offered 20 seats per year for Master’s course from the universities of Japan, for serving Indian Railway officials. This programme is fully funded by Government of Japan.

Even as Maharashtra Chief Minister Uddhav Thackeray has questioned the high costs and feasibility of the bullet train project, it has now emerged that the Union Government has allotted 5,600 crore for the ambitious project for fiscal 2020-21. Sources in the National High-Speed Rail Corporation said a provision of 5,600 crore has been made for the 500-km rail project, modelled on the lines of Japan’s famous bullet train.

Apart from the Centre’s contribution, there is also a move to get 5,000 crore from Maharashtra and Gujarat, which own a fourth of equity in the project, in the form of extra budgetary resources (EBR), the Western Railway’s “Pink Book” said. The Japan International Cooperation Agency (JICA) has made a soft loan commitment of Rs 1.10 lakh crore to execute the project. Interestingly, Thackeray had likened the bullet train project to a “white elephant”, saying a decision on it will be taken only after he is convinced
it will boost industrial development of the state.

Apart from the Centre’s contribution, there is also a move to get 5,000 crore from states of Maharashtra and Gujarat, which own a fourth of equity in the project, in the form of extra budgetary resources (EBR), the Western Railway’s ‘Pink Book’ said.

It can be noted that in FY20, the two states collectively contributed 1,000 crore in EBR towards the project. The Japan International Cooperation Agency (JICA) has made a soft loan commitment of 1.10 lakh crore to execute the project.

The Union government-controlled Indian Railways has a 50 per cent equity stake in the project. In her budget speech last Saturday, Union Finance Minister Nirmala Sitharaman highlighted that the high-speed train between Mumbai and Ahmedabad would be “actively pursued”.

About 47 per cent of land for bullet train project have by now been acquired. The Railway Board Chairman V.K. Yadav said, “Till date 47 per cent of the land has been acquired for the 508-km long Ahmedabad-Mumbai high speed rail project, and rest of the 53 per cent will be acquired in next six months.” He said the work of acquiring the land is in advanced stage and it will be available for the project soon.

The chairman said that a total of 1,380 hectare land is required for the project, out of which railways has acquired 479 hectare from the  private persons and 119 hectare from government land. He also said that once the 90 per cent of land is acquired, six out of 29 tender packages for the project will be out in the month of March and April this year. Yadav also stressed that theNational High Speed Rail Corporation Limited (NHSRCL) will be able to complete the project before its deadline of December 2023.

He said that the project will be complete in three phases and the first phase of 50 km stretch will be completed by August 2022. According to NHSRCL, the tender for design and construction of civil and building works, including testing and commissioning of 237 km length of mainline out of elevated 460 km, has been floated. The mainline has one mountain tunnel of about 280 metre, 24 river crossings and 30 road and canal crossings.