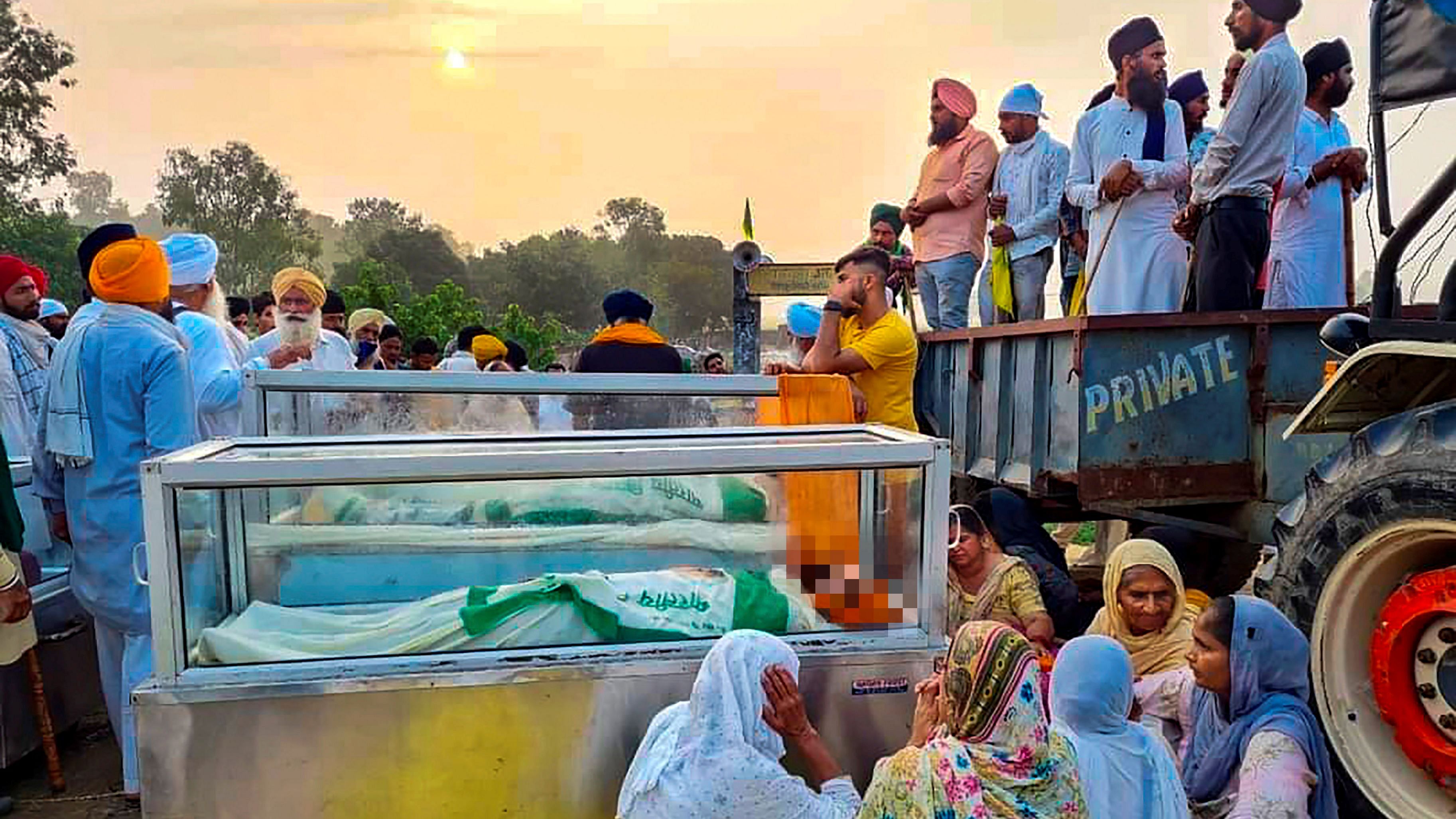 The brutal killing of four protesting farmers and a journalist in Lakhimpur Kheri shocked the nation. A report by Mudit Mathur

The Supreme Court snubbed and expressed displeasure over the conduct of Uttar Pradesh government despite nation-wide uproar over the incident of mowing down of the protesting farmers, killing four farmers, a journalist in brutal attack and three BJP workers too were killed in retaliatory clashes while their vehicle overturned after it lost control. Several farmers sustained grave injuries. Videos which surfaced from the crime site on social media completely demolish the allegations of stone pelting and violence initiation against the farmers as it showed the over-speeding convoy ramming into the farmers from behind, allegedly by the son of union minister of state for Home Affairs.

Consistent pressure from the agitating farmers’ groups and a week-long high-pitched political turmoil from opposition parties, ultimately bore result on late Saturday night with the arrest of Ashish Mishra Monu, the son of Ajay Kumar Mishra Teni, who was inducted in last reshuffle to assist Union Home Minister Amit Shah in his ministry but pressure to oust him from the Modi cabinet is still mounting.

The leaders of Kisan Morcha, Rakesh Tikait, Dr Darshan Pal, Yogendra Yadav, Joginder Singh (Ugrahan), Hannan Maula and Harpal Bellari demanded dismissal of the minister. The Morcha leaders said, “Farmers will burn effigies of Prime Minister Narendra Modi and Home Minister Amit Shah on Dusshera in protest against the violence. Their action plan includes blocking Railways on 18th October from 10 am to 4 pm if their demands are not met.” The leaders said the government is trying to defame farmers’ agitation and we will reply them through non-violent means. Our movement will continue to be stronger until three farm laws are repealed and statutory guarantee of minimum support price of their produce is legislated.

“We will observe October 12 as ‘Shaheed Kisan Diwas’ and we have appealed to the farmers all over the country to join the ‘antim ardas’ (final rites) of the farmers, who died in Lakhimpur Kheri at Tikonia,” they announced.

“SKM is demanding that the Union Minister of State for Home Affairs, Ajay Mishra Teni, should be dismissed from the Government and arrested on charges of spreading disharmony, murder, and criminal conspiracy, and also that Ashish Mishra (his son) and his associates (amongst whom, names of Sumit Jaiswal and Ankit Das have surfaced), accused for murder in a registered FIR, should be immediately arrested,” the leaders said.

Addressing a mammoth ‘Kisan Nyay Rally’ at Jagatpur inter-college ground in Varanasi, PM Modi’s parliamentary constituency, Priyanka Gandhi launched a blistering attack on Yogi Adityanath-led UP government as well as the central government over issues from farm laws to unemployment to handling of the Coronavirus pandemic and warned that India is not a fiefdom of BJP ministers or the prime minister.

Expressing her solidarity with the victims’ families of farmers, who had lost all hopes to get justice in UP, she vowed to fight for justice till MoS Ajay Mishra resigns.  These farmers were mowed down at Lakhimpur on October 3 allegedly by the son of a union minister of state while they were protesting peacefully against three contentious farm laws.

Accusing the government of shielding Union minister Ajay Mishra’s son in the Lakhimpur Kheri violence case, she underlined, “No one can scare us. Nobody can stop us.” “I am not talking here about the elections. I am talking about the state of our country. The country is not the fiefdom of BJP office-bearers, their ministers or the prime minister or their capitalist friends. This is your country. Farmers are its soul. Our farmers fought for the independence of our country and their sons saves our borders. If you do not become aware and remain entangled in their politics, then neither will you be able to save yourself nor the country,” emotionally charged Priyanka cautioned the gathering.

Police had arrested three accused so far including minister’s son Ashish Mishra Monu out of 15-20 henchmen with his convoy and identified six of them including driver and two dead BJP workers. The FIR of farmers alleged that Monu was sitting in the first Mahindra Thar SUV on left window side and firing bullets on farmers. Police is searching for the owner of Toyota Fortuner Ankit Das, who is a local contractor, and Sumit Jaiswal, who is absconding after allegedly lodging frivolous FIR of stone hurling and mob lynching against the farmers. Ankit Das was rescued by police officer from the spot and shown confessing that he was with “Bhaiyaji” in a viral video clip conversation.

The protest of farmers is also being seen in the light of an open challenge evidently thrown by union minister of state for Home Ajay Kumar Mishra Teni. The minister delivered a blustering speech at a public meeting at Sampoornanagar hurling threats at farmers agitating against the Centre’s three farm laws, which prompted the protest at Lakhimpur Kheri that in turn turned into a crime scene of havoc.

A video of his annoyance over farmers’ protest become viral wherein he targeted the farmers’ protest branding them outsiders threatening to force their exodus from the state. The obvious reference was aimed at Sikh farmers who migrated to the Tarai belt of the State soon after Independence and cultivate huge production of sugarcane and rice. Farmer leaders alleged a deep-rooted conspiracy behind his move to create Hindu-Sikh divide and to brand them anti-national “Khalistani” and incite the feeling of disintegration among the people.

“Fix yourselves or face me. Will sort out the protesters in two minutes. I am not just a minister or an MP. Those who know me from before I became a legislator would also know I never retreat from challenges.” His obvious reference was reminder of his past criminal antecedents where he was acquitted in a daylight murder of a trader by a local session court and appeal against it is pending before the Lucknow Bench of Allahabad High Court since 2004 causing inordinate delay in the course of justice.

“Among the unnamed 15-20 accused in the (farmers’) FIR, six have been identified so far. Three of them had died on the spot. Two others — Lovkush from Banbirpur and Ashish Pandey from Taranagar — were arrested on Thursday,” said Satya Narain Sabat, ADG Lucknow zone. “We have gathered vital leads from the two persons during questioning,” he added.

Bharatiya Sikh Sangathan president Jasbir Singh Virk said farmers were ready to stage a black flag protest at the Maharaja Agrasen Sports Ground helipad where Teni and deputy CM Keshav Prasad Maurya were to address an event on Sunday. “But they didn’t arrive, and the farmers learnt they had changed their plan and were taking the road. My farmers saw it as a success and were marching back,” he added.

The brutal incident happened on October 3 which resulted in killing of four farmers – Lovepreet Singh (20), Daljeet Singh (35), Nachattar Singh (60) and Gurvinder Singh (19), and journalist Raman Kashyap besides injuring around 12-15 persons in a frenzy of rage and arrogance of power by the minister’s son. It was mainly reactionary because farmers failed in their programme at Maharaja Agrasen Inter College Tikunia demonstrating against the three farm laws showing black flags. The Samyukt Kisan Morcha, umbrella organisation of farmers’ organisations, had given a call to boycott and show black flags to BJP leaders and ministers whenever they visit in their vicinity to attend any public functions. The paternal village Banbirpur of Mishra comes under Tikunia police circle where some wrestling competition (Dangal) was also organised.

While the families of farmer and journalist, killed in Sunday’s violence, said the bodies had bullet holes, the autopsy report did not mention any gunshot wounds. Quoting eyewitnesses’ account of incident, the Times of India mentioned that “over 10 shots” were fired, that those in the convoy were the ones who fired and that the sound of bullets went off for hours when the two cars were burnt down, hinting those cartridges inside the vehicles may have combusted.

Ram Asrey Kashyap, father of slayed journalist Raman said in his complaint that “Those at the site said my son was shooting video interview with Sanyukt Kisan Morcha leader Tajinder Singh Virk when one of the cars in the convoy sped towards him.” “Eyewitnesses said he ended up shooting the footage of a car that was mowing down farmers, which was the reason why my journalist son was shot at. The footage reportedly recorded the gunshots, too,” his father’s complaint added.

Expressing its dissatisfaction over status report filed by UP government the Supreme Court Friday came down heavily on the government and asked senior counsel Harish N. Salve why the accused in the case have not been arrested so far? Salve, who has settled down in London, and who was engaged overnight by the government, appeared for the UP government through video conferencing.

The stringent observation came from the three-judge Bench headed by Chief Justice of India N V Ramana when Salve submitted that Ashish Mishra has been summoned for questioning. Expressing the opinion of bench, justice Ramana said, “We are not satisfied with the steps taken by the Uttar Pradesh government.”

“This is the opinion of the bench. We expect there is a responsible government, police officers and system. When there is a serious allegation of gunshot injury, will other accused in this country be treated the same way, by sending invitations?” asked the Chief Justice of India.

Salve assured the Court that he will talk to the concerned authorities of the State Government and ensure that necessary steps be taken keeping in view the concern expressed by this Court and also assured the Court that he will communicate with the State Government to get the investigation of the alleged incident conducted by some other Agency so that fair, free and impartial investigation is held.

Salve also assured the Court that he will communicate with the concerned highest police authorities in the State to protect and preserve the evidence and other material relating to the incident in question. Now in view of assurance, the apex court will take up this matter on 20th October as a first case to review the progress of investigation.

In its status report, the UP government informed the apex court that a single-member judicial inquiry panel of retired high court judge Pradeep Kumar Srivastava was constituted on Thursday which will submit a report in two months. The SIT headed by DIG Upendra Agarwal will oversee the probe, with PAC commandant Sunil Kumar Singh as a senior member and ASP Singh as a member, along with the others. A technical consultant is also part of the team. 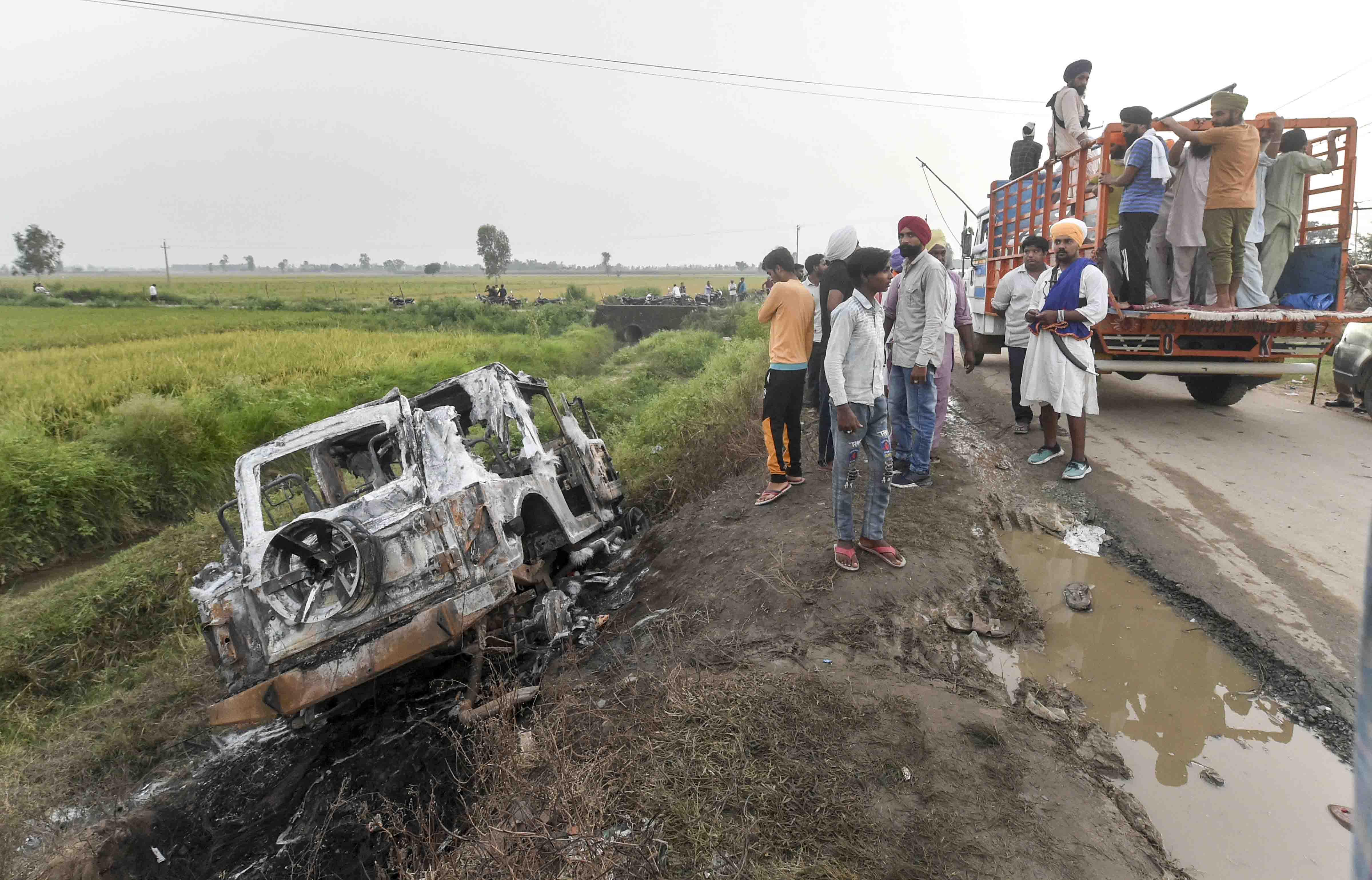