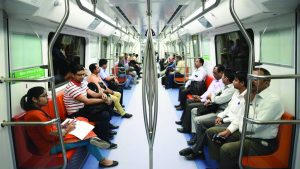 Much before India’s capital Delhi is scheduled to go for polls next month, apathy towards the ongoing countrywide parliamentary elections appears to have gripped the common people here. Few now discuss the poll issues which with each passing day appear to have waned, if not totally lost. There are few corner meetings in localities even having substantial presence of senior citizens, which were centre of warm discussions.

The short and focused poll talks with professionals while traveling in the Delhi Metro too have lost the political steam. One may find them just playing computer games on their smart phones. This voter neutrality may be noticed just after conclusion of the third phase of the national elections. The polling for more than half of the seats of the 543-strong Lok Sabha is finished.

The poll-related violence saw death of two persons in Andhra Pradesh first phase, when the country exercised its democratic options to elect 91 seats for the Lok Sabha. The challenge to the five-year-old Modi regime continues to be fragmented. The Congress Party under its new president, Rahul, continues to be in dilemma in opposing the ruling Bhartiya Janata Party (BJP) by mustering a formidable political alliance with the regional outfits, whether it is Aam Admi Party in Delhi or the SP-BSP alliance in UP. Rahul’s attempt to portray a pro-Hindu image by wearing pious thread too is not helping his party’s candidates in the BJP-strong Hindi heartland.

In Andhra Pradesh, despite olive branch from Jagan, he could not revive party ties with the young leader, who was falsely framed in the CBI enquiry with the connivance of the Telugu
Desham supremo, Chandra Babu Naidu and P. Chidambaram, who had supported a Public Interest Litigation (PIL) before the Andhra Pradesh High Court.

Rahul and his sister, Priyanka, are trying to correct the mistakes of their mother, Sonia, who continues to control the party structure across the country. In this backdrop, the ongoing challenge from the Congress Party to the leadership of Narendra Modi needs more focus on issues than in indulging verbal unsubstantiated accusations. However, the BJP brand nationalism, its core pitch to retain power too appears to have diluted.

The Election Commission, however, can claim that the total voter turnout so far has been substantial. In the third phase too it was 63.24 per cent. All 543 seats would be counted on May 23 after end of the seven-phase polling on May 19. The participation of an estimated 1.5 crore young voters in the age group of 18-19 years, who are voting for the first time across the seven phases will be crucial in many constituencies. In the last general elections in 2014, more than 55 crore Indians had voted (66.3 per cent) with the BJP emerging victorious with little over 30 per cent votes, giving a five-year mandate to a government led by Prime Minister Narendra Modi.

Both Modi and Rahul have failed to take up economic issues. Modi talks about national security and some flagship schemes, but seldom mentions what has happened to make in India. The Indian markets have been dumped with Chinese consumer goods brought both legally and illegally destroying small, medium and cottage industries.

Rahul offers 72,000 per year charity to the poor, but does not talk about improving business or industry. In this backdrop, the alienation of the voters is natural, who is also saddened by cheap accusations against each other.

Modi’s campaign against corruption could not make much headway this time, because the rampant corruption in Uttar Pradesh, where his party has unprecedented majority. The children died in the Gorakhpur Medical College due to the non-availability of Oxygen. The company which used to supply Oxygen was allegedly asked to cough up more bribe than asked during the previous government’s regime. Interestingly, Gorkahpur is the home district of the chief minister Adityanath Yogi, who instead of punishing the guilty, tries to raise frivolous quasi-religious issues, whether Lord Hanuman was a dalit etc.

Rahul again failed to cement an alliance in UP with the local political outfits, where BSP supremo Mayawati and Samajwadi Party leader Akhilesh has brought the formidable dalit leader and his father Mulayam Singh on the same political platform that too after a gap of 25 years.

The country’s opposition parties have failed to challenge the government on economic issues. The criticism of the demonetization has only furthered class antagonism, enough for people to swallow hardship. Modi has succeeded in keeping the anti-Modi forces fragmented, according to indications from various states.

The consolidation of the Muslim votes in favour of the opposition parties may further complicate political and economic issues with communal overtones. In such a situation, the issue of governance loses shine. We have to wait till May 23 for the final results.