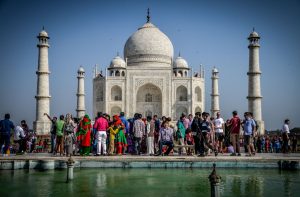 India’s Supreme Court recently advised the Central and Uttar Pradesh governments to either shut down the Taj Mahal, demolish it or restore it. The statement was obviously out of anger and exasperation against indifference of the concerned authorities. For past 31 years, the apex court has been trying to save the 17th century monument by passing a slew of orders to force governments and Archaeological Survey of India to take up restoration work on a war-footing. All its suggestions and verdicts seem to have no takers.

The latest scolding from the court came in response to a petition citing concerns about the impact of pollution on Agra’s ivory-white marble mausoleum, which draws about 70,000 people every day. In May this year, the court had instructed the government to seek foreign help to fix the “worrying change in colour” of the Shah Jahan-built structure that first turned yellow and was now turning brown and green due to pollution, construction and insect dung.

This is not the first time that the beauty of the world’s seventh wonder is under threat. In the 18th century, the Jat rulers of Bharatpur invaded Agra and attacked Taj Mahal. The two chandeliers, one of agate and another of silver that were hung over the main cenotaph, were taken away by them, along with the gold and silver screen. The gold shield which covered the 4.6-metre-high (15 ft) finial at the top of the main dome was also removed during the Jat despoliation.

By the late 19th century, parts of the buildings had fallen into disrepair. During the time of the Indian Rebellion of 1857, the Taj Mahal was defaced by British soldiers and government officials, who chiselled out precious stones and lapis lazuli from its walls.

In 1942, the government erected a scaffolding to disguise the building in anticipation of air attacks by the Japanese Air Force. During the India-Pakistan wars of 1965 and 1971, scaffolding were again raised to mislead bomber pilots.

The latest threats have come from environmental pollution on the banks of the Yamuna River. The pollution has been turning the Taj Mahal yellow. To help control the pollution, the Indian government has set up the Taj Trapezium Zone (TTZ), a 10,400-square-kilometre area around the monument where strict emissions standards are in place. But the TTZ authority, it seems, is not so serious about curbing the pollution in the area. On July 11, the Supreme Court grilled it for considering proposals to expand industries in the city of Taj Mahal when there was an “ad hoc moratorium” on it.

Concerns for the tomb’s structural integrity have recently been raised because of a decline in the groundwater level in the Yamuna river basin which is falling at a rate of around 1.5 m per year.

In 2010, cracks appeared in parts of the tomb, and the minarets which surround the monument were showing signs of tilting, as the wooden foundation of the tomb may be rotting due to lack of water.

Politicians, however, suggest that the minarets are designed to tilt slightly outwards to prevent them from crashing on top of the tomb in the event of an earthquake.

In 2011, some predictions suggested that the tomb could collapse within 5 years. Small minarets located at two of the outlying buildings were damaged by a storm on April 11 this year.

The Centre and the state need to get serious about creating a roadmap to tackle the monument’s deteriorating condition, with particular focus on pollution. As the Supreme Court recently put it, “Taj Mahal has to be protected. Taj is more beautiful than the Eiffel Tower and could have solved the country’s foreign exchange problem.”

KSRTC employees to be paid salary arrears before Onam