When Harshit Sood came to meet his uncle’s family living in the Lower Jakhu area of capital city of Shimla, a few days ago, he never thought that he had to land in hospital for a reason he never expected. He was climbing the stairs when a group of monkeys attacked him. He ran to save himself but during this course he fractured himself. He was admitted in Indira Gandhi Medical College Hospital, Shimla, for treatment.

There were as many as 86 such cases of monkey attacks registered with the state government record in the year of 2017-18. And there is another side of the picture. Due to monkeys, 12 states have witnessed crop loss of 286 crores in the year 2017-18 (till March 31) while the loss to horticulture crops is 173 crores. A total of 2,318 villages have been identified in the state which are under severe attack of monkeys spread over 57 tehsils in 10 districts of the state out of total 12. “Right from my forefathers, we were farmers since many decades. But in the last few years when we found that kheti-badi (agriculture) is a business of loss due to monkeys and other wild animals, we sold our land and now we have opened a garment showroom in New Shimla,” said Ravinder Jasta of Shimla Gramin area.

He is not alone who is forced to stop agriculture and shift to some other business in past few years. Sanjay Dhatwalia of Bijhri in Hamirpur district have huge losses due to monkeys in his area. Now Sanjay is working as an employee at a shop in Badsar to earn bred-butter to his family. The state government claims that of the total population of 2.7 lakh around 1.39 lakh monkeys have been sterilized since 2006, of which 50 per cent were females. However, many social organisations do not believe to the government figures. “This claim is not correct. Monkeys have caused big losses to the agriculture in Himachal. Large number of farmers are now on roads and fighting for the bread-butter,” said Dr Om Prakash Bhuraita, National Treasurer Bharat Gyan Vigyan Samiti (BGVS), who is fighting for the cause of state farmers for the last three decades.

On this issue RC Kang, chief wildlife warden and principal conservator of forest (wildlife) said that department is trying its best to save crops in Himachal. “Wildlife experts from Bengaluru will study the eating habits of monkeys and further suggest measures to reduce their attacks on farmlands in the state,” added Kang.

According to the experts the state farmers are facing onslaught from all directions. Firstly, there are natural calamities like drought, floods, hailstorms or delayed rains. Secondly, they are being subjected to exploitation from middleman in the markets besides diminishing subsidies and increasing cost of agricultural inputs. Wild animals including monkeys invade fields and destroy cash crops (off-season vegetables, apple etc.) and food grains (maize, millet etc.). “The livelihood of farmers today in Himachal is seriously threatened by wild animals. Crop raiding wild animals like monkeys (rhesus macaques), wild boars, blue bull, hares, porcupine, parrots, bear, bats peacocks etc. have broght farmers on large numbers on roads,’’ said Kuldeep Tanwar, a leading farmer and CPM leader.

According to the data collected by the Tehelka reveal that state government have spent 48,63,996 in the last six years just to pay as conpensation towards monkey biting cases. As many as 1,220 monkey biting cases came in front of government for claims in these years.
After much hue and cry from the state farmer unions, state government sent a proposal to the centre in 2017. After which central environment, Forest and Climate Change Ministry issued a notification on December 20, 2017, declaring monkeys as vermins in 38 more tehsils of Himachal Pradesh covering 10 districts.

The threat posed by wild animals, including monkeys becomes all the more grim in a scenario where aaproximate 68 percent families in the state possess one hectare less of agricultural land and 80 percent people depend on agriculture and horticulture. Out of 3,243 GPs nearly 71 per cent panchayats (2,301) in the state are affected by wild animals menace while 80 percent farmer families (8,00,000 ) are affected.

According to a survey conducted by Kheti Bachao Sangharsh Samiti, the state have total 3243 gram panchayats (GPs) out of which 2301 are affected. The study revead that the intesity of problem in 936 GPs is low, 770 middle and high in 595 GPs. Report says that ‘’the Centre has once again declared rhesus macaque monkeys as ‘vermin’ in ten districts of Himachal Pradesh, thus allowing the state forest department to cull them for preventing crop loss, conflict with humans, and property loss’’. 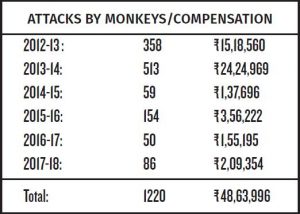 “The fresh notification, brought out by the Ministry of Environment, Forest and Climate Change (MoEF&CC), will be valid for an year and will be applicable only in non-forest areas. MoEF&CC had issued a similar notification in May 2016 that expired after one year. Himachal Pradesh forest department, though, did not cull a single monkey between 2016 and 2017, its senior officials told DNA. In Bihar and Uttarakhand, too, they had issued similar notifications, declaring nilgai and wild boars as vermins in the respective states,” said Dr Om Prakash Bhuraita.

After the 2016 notification became void, previous Virbhadra Singh-led government sent a fresh proposal to the environment ministry seeking to declare monkeys as vermin again. The proposal was accepted after due appraisal, a ministry official said. The issue of crop losses caused by monkeys was also poll issue in the recent assembly elections. In their electoral campaigns both the Congress and the BJP had promised farmers of appropriate action.

“We have issued a fresh notification, it is not an extension of the old one. Apart from Himachal Pradesh, Bihar had also sought renewal of the notification to declare Nilgai as vermin but their proposal has not been accepted. They are yet to provide impact studies. Uttarakhand has not sought any order to declare wild boars as vermin again.” said a senior ministry official on the condition of anonymity.

When asked as to why the state government sought a fresh notification when no monkey was culled, a senior officer in Forest department said, “Though we did not cull any monkey, we reached out to farmers to create awareness and have succeeded to an extent in curbing the solid waste issue. Open dumping of food waste is the main attraction for monkeys.”
He added, “Culling is also difficult as religious sentiments are attached with monkeys. Unless any Panchayat passed a resolution to cull monkeys, we do not want to cull them.” Infect, People are reluctant to harm animal, due to the religious sentiments associated with it, believing it to be a descendant of Lord Hanuman.

Animal rights activist Gauri Maulekhi who had moved Supreme Court against the earlier orders of Centre, said, ‘’Conflict with wild animals is a direct result of mismanagement of forests. The forest department has waste tens of crores of public funds on counterproductive sterilisation and now they they want to kill the same sterilised monkeys.’’

Kheto Bachao Samiti Conservative estimates put the loss of 300-450 crores to crops. (75-100 crores horticultural crops plus around 300 crores to agricultural crops). Fallow land due to wild animal menace (out of 78,791 hectares) amounting to loss of more than 500 crores. Watch & ward costs another 1,200 crores (5 to 6 lakh family members/hired persons are engaged in this effort for more than 150 to 200 days). “Total loss according to our study is 2,200 crores per year,’’ said Bhuraita.

According to unofficial records 66.52 per cent land is with the forest department (out of which PAN is 15 per cent) while only 17.14 percent is with farmers (out of which only 11.17 per cent area in cultivable by 9,60,765 farmer families. ‘’Due to all these reasons farmers are migrating from different parts of Sirmour to Shimla and working as laborers in Drabil, Jhakando, Nainidhar, Lojhamanal, Koto Bonch, Panog, in Shillai and from other blocks,’’ claimed the farmer leader. He also claimed that Sumoti Devi of Kando Bhatnol, Dinesh of Navan Bahtwar while a woman died near Ghaghas bridge while saving her children from attacking monkeys, a motorcyclist was killed by group of aggressing monkeys on Kalka-Shimla highway, in Mandi little girl died after monkeys attacked her, Mamta Sachdeva, a young women died in Shimla when group of monkeys attacked her on November 4, 2014.
State Forest Minister Gobind Singh Thakur said that state government is well aware about the losses of crops and human lived in the state by monkeys and other wild animals. ‘’We have framed policies for the compensation. We have also took certain measures to protect people from monkey attacks. Monkey’s sterlisation programme is also yielding good results,’’ said Thakur. 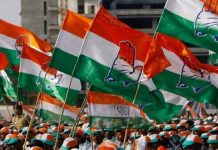 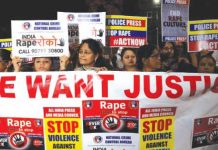