With an eye on the next big polls, the PM completes his month-long performance review of 52 ministers, does course correction by dropping some ministers and including young leaders in the cabinet 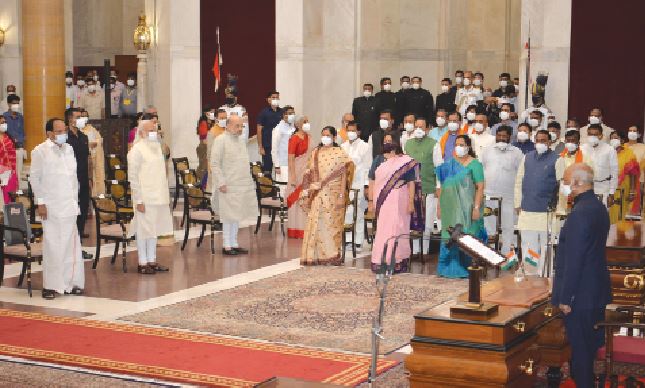 Prime Minister Narendra Modi has just over two years left before India moves into election mode again for the 2024 Lok Sabha polls. Eyeing the next big polls, the PM completed his month-long review of the performance of his 52 ministers and the course correction in the form of dropping some ministers and inclusion of young leaders showcases his new war team for the 2024 general election.

Those who have been shown the door are Harsh Vardhan, Prakash Javadekar, DV Sadananda Gowda, Ravi Shankar Prasad and Ramesh Pokhriyal ‘Nishank’. The shake-up is meant to send out a strong message: there is no place for non-performers or underperformers in the Union Cabinet. It’s also an admission by the government that things have not exactly panned out as per the people’s expectations on several fronts, be it healthcare, education or environment. The government’s handling of the Covid-19 pandemic has drawn criticism not only from the Opposition but also from the judiciary.  The young leaders have been entrusted with the challenging task of improving the government’s image. They will find themselves under intense pressure to perform during the three years leading to the 2024 Lok Sabha elections.

Modi is in his 7th year as prime minister and he has just surfaced a major challenge posed by the Covid-19 which led to alarming number of deaths, scarcity of hospital beds, oxygen, medicines and vaccines, an economy devastated by the pandemic, agitation by farmers protesting against the recently enacted farm laws. And there are problems at borders with China and Pakistan. Aware of the issues, the prime minister held a review exercise and met his 52 ministers during June 2021.

The PM split his 52 ministers into 10-sub-groups and held meetings with each group lasting 6-7 hours every day where each Cabinet Minister made a Power-Point Presentation of the tasks assigned in 2019 and targets achieved during two years. The PM reportedly made it clear to all the ministries that each one of them will have to come out with at least two to three projects which could be show-cased before the 2024 Lok Sabha polls to the people. The PM reportedly made it clear that the ministries must complete all the projects by August 2023 as 2024 will be an election year.

Experts point out that Modi has just over two years before India moves into election mode again for the 2024 Lok Sabha polls. Will he build on the economic agenda to boost manufacturing and to check inflation and provide jobs to the unemployed. Much of this depends on taming the pandemic by speeding up vaccination to reduce chances of another wave of Covid-19 and the bouncing back of the economy this fiscal.

These could give Modi an image makeover to face 2024 elections. There is a rough and bumpy road ahead. However, former chief minister and senior leader, Devendra Fadnavis said after poll strategist Prashant Kishor met NCP chief, Sharad Pawar that notwithstanding any strategies by the opposition, Modi would again be the PM in 2024 as he “rules the heart of the people”.

The PM is keen that his dream ‘Bullet Train project’ is completed by 2023. Little doubt new Railway Minister, Ashwini Vaishnaw, bureaucrat turned entrepreneur turned politician, has a task cut for him. The G-20 Summit which India will be hosting for the first time in 2023 is another prestigious project. Ram Temple will also be show-cased as a major feather in resolving all long pending issues.

Indeed Modi 2.0 witnessed hectic activity with legislation on ‘triple talaq’, the surprise reading down of Article 370 granting special status to Jammu and Kashmir and dividing the state to two union territories. Then there was the Citizenship Amendment Bill. However, the government’s attempts to push through economic reforms backfired — the agricultural reforms brought farmers on to the streets, the labour reforms appear to have come unstuck and the much-touted Citizenship Amendment Act of 2019 still awaits rules to be framed. Also within days of declaring India as the ‘pharmacy of the world’, the government was scouring the world to source vaccines and medical equipment as the entire health system was stuttering due to shortages.

BJP’s defeat in the West Bengal elections has shaken the invincibility aura that Modi and Shah carried around. The poll outcome has raised hopes among the opposition ranks of edging past the BJP in the 2024 general election. With tales of dead bodies floating at the banks of the Ganga across Uttar Pradesh and Bihar made the government look vulnerable.

The situation for Modi II suddenly looked akin to UPA II. The UPA, under Prime Minister Manmohan Singh, battled allegations of corruption in 2G spectrum allocation, coal block allocation and in the conduct of the Commonwealth Games. The challenges for the BJP are huge, particularly in Uttar Pradesh which goes to polls early next year. The inroads made by Aam Aadmi Party in UP and the recent reversals in the panchayat elections in Uttar Pradesh and Chief Minister Yogi Adityanath’s handling of the Covid-19 pandemic appear to nullify the electoral gains the BJP was hoping for by building the Ram Temple at Ayodhya.

While the prime minister has pushed for an Atmanirbhar (self-reliant) Bharat, he has to ensure that this does not lead to erecting high tariff barriers to protect inefficient domestic industry. That will only make India less competitive in the export market. For the BJP to retain power in 2024, Modi will have to deliver on employment and economic growth apart from providing financial succour to those who have been badly hit by the pandemic. In 2021, he must demonstrate that he has put the Indian economy firmly on the path to recovery while narrowing the inequalities caused by the pandemic.

The Indian economy is not in good shape and offers little hope for any chances of a robust economic recovery, at least till the next general elections in 2024. Even most regional economies in South Asia which were way behind India’s economic performance are now way ahead particularly Bangladesh. Before the pandemic, India’s youth unemployment rate for 2019 touched 23%. Its annual GDP performance in the year 2020 crashed to -8.0%, the worst amongst all developing nations (Bangladesh grew at 3.8% in 2020). For a nation that has been amongst the fastest growing economies, these numbers appear puzzling.

In the run up to the 2024 general election, the government is keen to build up an image of Modi as “Yug Purush and Vikas Purush”. The task given to each minister is come out with at least two to three projects which could be show-cased before the 2024 Lok Sabha polls to the people. The PM reportedly made it clear that the ministries must complete all the projects by August 2023 as 2024 will be an election year shows the government’s eagerness to kick start preparation for 2024 as early as from 2021 to take opposition unawares. However, the BJP’s defeat in the West Bengal elections, question mark over handling of pandemic, the economic slide witnessed in the country and rising tensions on the borders, could make the journey to 2024 general election bumpy and make the government look vulnerable. Meanwhile, all eyes are on Modi’s new war team for the 2024 general election.