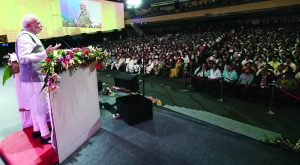 Prime Minister Narendra Modi and BJP chief Amit Shah have taken the overall command of Uttar Pradesh to take the political battle from the Parliament to the streets of this crucial state. BJP is strategising to portray the image of Modi as a face of a transforming India and growing economy despite severe attacks from opposition across the country, especially from the traditional citadel of Nehru-Gandhi scion.

Sharply countering the attack from his opponents during thedebate on no-confidence motion, Modi openly drew parallel with Mahatma Gandhi. “As Gandhi Ji was never scared of residing with industrialist Birla family, I too find nothing wrong in associating with industrialists. I am not scared of doing so,” Modi was speaking at the inauguration of 81 investment projects worth 60,000 crores in Lucknow. Galaxy of top industrialists participated in the event to back up his industry-friendly efforts. Eminent industrialists including Kumar Mangalam Birla, Gautam Adani, Subhash Chandra, Sanjiv Puri, Yusuf Ali, B R Shetty shared their experiences.

Modi vowed, “My conscience is clear”, adding that even Mahatma Gandhi was known to have been in a long-term association with the Birlas as he stayed with the industrialist family on several occasions. Launching a veiled attack on the opposition, Modi added, “You will never see them in a photograph with industrialists but all of these industrialists have bowed down to them at their residences. They only meet behind the curtains.” “Amar Singh ji knows it better,” he smilingly stared at him in the audience.

The presence of saffron dressed expelled Samajwadi MP Amar Singh surprised everyone in the political circle about his new found love with the prime minister because he was once a trusted aide and master strategist of Samajwadi patriarch Mulayam Singh Yadav.

Recently, Congress Chief Rahul Gandhi in the Parliament had accused PM Modi and Defence Minister Nirmala Sitharaman of “lying” to the nation about the truth of clandestinely done Rafale deal with a French company. He has accused the government of buying the fighter jets from France at three times higher cost than what the UPA government had paid in its tenure. The deal envisaged defence collaboration with the newly formed company of junior Ambani worth 35,000 crores for manufacturing Rafale aircraft, that job was earlier assigned to government-owned undertaking- Hindustan Aeronautics Ltd during the UPA regime.

Taking jibe at Modi in the Parliament, Rahul Gandhi said, “A person who had pledged before the nation that he will uphold their trust as ‘chowkidar’ (watchman) has virtually betrayed and actually become ‘bhagidar’ (shareholder).”

Retaliating to Rahul’s comment at the Lucknow event, Modi said, “Now there are charges on me that I am not a ‘chowkidar’ but ‘bhagidar’. I accept these allegations. Yes, I am a ‘bhagidar’ in the pain of the poor people of India. I am a ‘bhagidar’ of every effort that provides employment to the youth of the country. I am the son of a poor mother, I have seen poverty closely and can understand it better.”

The Prime Minister also took a jibe at the previous regime of Akhilesh Yadav in UP as well as the recent controversy regarding his bungalow. Modi said, “The period from 2014 to 2017 since the Yogi Adityanath government was formed in the state was very tough. We kept asking the state government to build houses for the poor, we were giving funds too but the previous governments were not interested. Rather, they were interested in building their own bungalows.”

The BJP’s first Prime Minister Atal Bihari Vajpayee conceptualised the development model of Lucknow as its representative in parliament and inspired by his perception, Modi continued his vision in developing 100 smart cities in the different states of India. Marking the third anniversary of three key government initiatives related to urban development — Pradhan Mantri Awas Yojana (Urban), Atal Mission for Rejuvenation of Urban Transformation (AMRUT) and the Smart Cities Mission, he inaugurated 99 development schemes worth 3,897 crore on the occasion.

The political importance of UPcould be gauged from the fact that ever since BJP lost Lok Sabha by-election due to sudden formation of BSP-SP Congress alliance, Prime Minister organised five official functions to woo various sections of society to showcase achievements of his government and telling about his vision for common man. Modi had visited Sant Kabir Nagar, Varanasi, Azamgarh, Mirzapur, Shajhanpur and Lucknow districts of Uttar Pradesh.

Modi efforts to thwart the grand alliance against the saffron party in the upcoming election would be a challenge for him. The duo, Modi and Shah, are on the job to dismantle this deadly combination against their governance. It will be interesting to watch whether caste chemistry of united opposition will override the politics of communal polarisation. 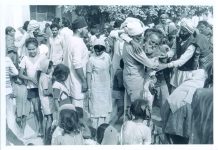