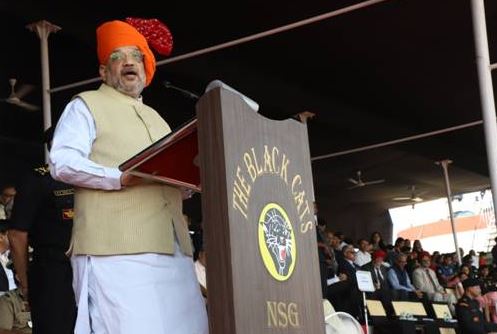 Union Home Minister Amit Shah on Tuesday said that terrorism is a curse for any modern developed society and is a roadblock for the growth and development of the people. India has been fighting the longest battle in the world against cross border terrorism. He said that Modi government’s policy of ‘zero tolerance against terrorism’ is unchangeable and a force like NSG is fully capable and equipped to safeguard the Nation from terrorism, upholding this policy of the government.

Attending the 35th Raising Day Ceremony of National Security Guard (NSG) as the chief guest in Manesar, Gurugram. the Home Minister viewed a splendid display of the preparedness of the NSG to tackle any terror attack against the country, during the event.

He paid tributes to the NSG martyrs who have made the supreme sacrifice for the Nation. He expressed pride and confidence and said that NSG’s capabilities in protecting the Nation from all acts of terrorism are unparalleled and it has always upheld its motto of ‘Sarvatra, Sarvottam, Suraksha’.

The Home Minister said that India is fighting a decisive battle to eliminate cross border terrorism in India, once and for all. Modi government has taken a bold decision to abrogate Article 370 for establishing a lasting peace in Kashmir.

Shah expressed confidence that NSG would always remain committed towards the Modi Government’s vision of a ‘World class Zero-Error force’ and would play a decisive role in eliminating terrorism in India.

Taking about the variety of activities undertaken by NSG, Shah said that on one hand, NSG has trained with Special Forces of different countries and exchanged best practices, on the other, NSG officers have participated in Swachh Bharat Abhiyan and other environmental conservation efforts, which is another form of service to the Nation. The Home Minister also congratulated NSG on its contingent unfurling the National Flag on Mt. Everest.

During the event, Shah also presented medals for gallantry and exemplary service to NSG commandoes and their family members. 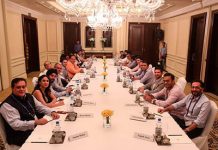