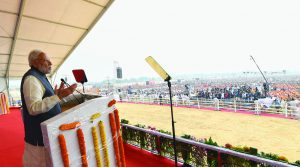 It was during the inauguration of the Kundli-Manesar-Palwal Expressway, also known as Western Peripheral Expressway, at village Sultanpur in Gurugram district of Haryana, when Prime Minister Narendra Modi launched a scathing attack at the Congress. Addressing the people after the launch of the KMP project, Narendra Modi took the opportunity to attack the previous Congress Governments of Haryana and Center, while virtually launching parties, election campaign for the upcoming Lok Sabha elections.

It is interesting to mention that when Modi was declared prime ministerial candidate by BJP for the last Lok Sabha polls, he went to Rewari to address a mammoth rally of ex-servicemen, about thirty kilometers from the present rally venue. Rewari meeting proved lucky for him and the party, with party coming to power and Modi becoming the Prime Minister.

This time, he has blamed the previous Congress governments for inordinate delay in completion of KMP project thus raising its cost manifold. He reminded the audience that this project was to be completed much earlier and was to be used during Common Wealth Games. Describing the project as test case for studying the corruption of UPA government, Modi said that Congress regime was synonymous with corruption adding that project which would have been ready by a decade back was struck due to incompetency of Congress Govt. Although, launching of project by Modi was dragged into controversy as Randeep Surjewala, Congress media-in-charge alleging that project was launched in hurry even without getting required safety clearance thus endangering lives of people traveling on express way but the people have welcomed. After becoming Prime Minister, it was his eleventh visit to the state. Praising youth of Haryana for bravery, Modi recalled that Haryana contributes maximum Jawans to our armed forces. Reminding the people of supreme sacrifices of the people of Haryana at border, Modi recalled the contribution of Major Shetain Singh and his unit. People’s Liberation Army of 5,000-6,000 soldiers equipped with heavy artillery support had attacked Chushul post in Sino-India war early morning. To add to misery, matters were made worst with, a crest of the ridge preventing Indian artillery from lending support thus, leaving the Jawans to fight for themselves.

The company led by Commander Singh fought till last man, last round, and last breath. Legend said that the brave 120 killed close to 1,300 enemy soldiers.The area where rally was held is known as Ahirwal belt and party has won not only last Lok Sabha seat from here but almost all assembly seats in last Haryana assembly election. Modi was welcomed by the crowd by raising slogans describing him as lion.

Modi, while tracing his bound for the people of Haryana since he was in-charge of party’s Haryana unit, he reminded that only recently he had laid the statue of veteran farmers leader Sir Chhotu Ram at his birth place in Gadhi Sanpala in Rohtak district.

Rally had its shadow on Haryana politics with Narendra Modi repeatedly mentioning Chief Minister Manohar Lal for his honesty and competency thus setting all speculations going on in political circles and fueled by Manohar lal’s opponents that prior to Haryana assembly polls, Manohar Lal will be replaced either by Rao Inderjit or by Birender Singh, both hailing from Haryana and enjoying Ministers berth in Modi regime.

Both Inderjit and Birender were present on the stage. Inderjit in whose Gurugram Lok Sabha constituency the rally was held had not taken much interest in mobilisation of people for the rally.

He is at loggerheads with Manohar Lal and there had been public demonstration of the hostility existing between them on several occasions. Prior to the rally, Dushyant Chautala, MP, heading splinter group of Indian National Lok Dal had secret close door meeting with Inderjit. To speak of accepting the demands raised by Inderjit, he even did not mention the demands.

Before the last Lok Sabha polls, Inderjit who has defected from Congress to BJP, was given Gurgaon Lok Sabha ticket, which he won and was made Minister in the Modi regime.

But his humiliation started soon and his political successor, Daughter Arti Rao was denied assembly ticket on the ground that close relatives will not be given ticket.

To add salt to the injury, Vandana Sharma, sister of Union Foreign Minister Sushma Swaraj was given ticket from Safidon constituency in Jind district.

She lost but was later made member of prestigious Haryana Public Service Comission. It is widely believed that Inderjit is in touch with Congress president Rahul Gandhi and may join his parent party Congress later or sooner.

According to some political observers, the rally had given breather to Lal and the party which was facing anti-incumbency sentiments. It has strengthened hands of Manohar Lal who was encircled by opponents within party who were eyeing on Chief Minister’s post replacing Manohar Lal accusing him of incompetency.

People by and large are not much happy with the performance of Manohar Lal led BJP Government. But to the benefit of BJP, main opposition parties Congress and Indian National Lok Dal are also facing worst situation. Congress is involved in infighting between supporters of former Chief Minister Bhupinder Singh Hooda and Congress Chief Ashok Tanwar to the extent that Tanwar supporters have even lodged complaint with Delhi Police that their leader was manhandled and attacked by supporters of Hooda during a rally in Delhi.

Besides, Bhupinder IS also facing a number of criminal cases in various courts for helping the builders to grab farmers land by misusing the provisions of land acquision act.

Although, Hooda claims that he is not deterred by the cases, which he claims are politically motivated as he, was exposing various acts of omission and commission of Haryana government led by Lal. But his opponents are using these cases for stalling his or his supporter’s installation as Haryana Pardesh Congress Committee Chief replacing the present incumbent Ashok Tawar.

Indian National Lok Dal party, which has entered into electoral alliance with BSP was posing major challenge to ruling BJP a month back. But, the vertical split in the party had changed the entire scenario.Party chief Om Parkash Chautala has expelled Dushyant Chautala, MP from Hisar and his brother Digvijay Chautala from the party for anti-party activities. Dushyant Chautala with the blessings of his father Ajay Singh Chautala has announced formation of a new party.