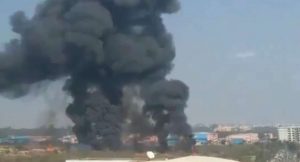 According to the reports, there were two pilots in the aircraft.

The crash took place at HAL Airport in Bengaluru.

A pilot was killed after he landed on the wreckage of the aircraft. However, the second pilot had ejected safely.

On January 28, an Indian Air Force Jaguar fighter plane crashed in Kushinagar, Uttar Pradesh. The incident was reported after the fighter plane took off from the Gorakhpur Air Force base.  However, the pilot managed to eject safely.