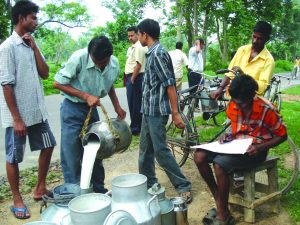 The reports that whopping 55-60 per cent of milk, cheese and other milk product samples in Punjab had failed the quality control tests and found to be unfit for human consumption has come as a shock. Way back in August 2016, the Supreme Court had suggested life imprisonment for the offence of milk adulteration and urged the central government to amend the Indian Penal Code to make the punishment deterrent for offenders.

Had an amendment been brought out in the Indian Penal Code and the Food Safety and Standards Act, perhaps violation of such a magnitude would not have taken place. Sadly, as many as 434 of the total of 724 samples had failed the quality test in Punjab. That shows that the violators cared a fig for the existing legislation that can impose only a maximum punishment of six months. A bench of the then Chief Justice of India T S Thakur and Justice
R Banumathi had maintained that it was high time that the Centre revisit the IPC as well as the Food Safety and Standards Act to make sure stringent penalties are provided under the law. It preferred the amendments made to Section 272 (adulteration of food and drinks) in the IPC providing life term as the maximum punishment for adulteration. The bench had also recalled its order in December 2013 and again in December 2014 whereby the central government was nudged by it to bring suitable amendments in the IPC to provide for maximum punishment on par with states like Uttar Pradesh, Odisha and West Bengal.

The apex court had observed that “since in India traditionally infants/children are fed milk, adulteration of milk and its products is a concern and stringent measures need to be taken to combat it. The consumption of adulterated milk and adulterated milk products is hazardous to human health… it will be in order that the Union of India come up with suitable amendments in the Food Safety and Standards Act, 2006 and the Union of India shall also make penal provisions on par with the provisions contained in the State amendments”.

Though the Health and Family Minister of Punjab Brahm Mohindra has asked the District Health Officers and Assistant Food Commissioners to take stern action against those violating the Food Safety and Standards Act, 2006, it would be of little help as punishment of few months and fine may not prove to be deterrent. As per the current legislation any person indulging in food adulteration is liable for imprisonment of six months and fine up to 10 lakh.

Tested at the government laboratory Kharar near Chandigarh, majority of the food samples seized have been found to contain spurious or adulterated milk. It is shocking for Punjab that went in big for a “White Revolution” after the much toutyed “Green Revolution”. Punjab today leads in per capita milk availability — 1,035 ml of milk per person per day.

The unearthing of such a large number of adulterated samples is the outcome of the special campaign “Tandrust” or Healthy Punjab launched by the Capt Amarinder Singh Government. According to Commissioner, Food and Drug Administration, and Director of Tandrust Punjab Mission, Kahan Singh Pannu, said the campaign was timely because nothing was more important that the health of citizens. After all Punjab people are known to be robust, full of zest and they feel proud telling that there day is not complete without a big serving of “desi ghee”, milk, paneer, butter and butter milk. Its staple diet includes “saag and makhan” served with lassi (butter milk) or butter chicken.

A joint team of the health department and police have reportedly unearthed a factory involved in the manufacturing of spurious milk and other dairy items at Mehon village near Devigarh town, 35km from Patiala. The team seized 7,000 litre spurious milk, 323 bags (50kg each) of skimmed powered milk, 250 litres of chemical used in making adulterated milk, 20 quintal cheese and 12 quintal ghee from the factory. The health department had earlier collected samples of milk and cheese from the same factory recently too. The factory owner, Anil Kumar Singla, was arrested and a case under Sections 420 (cheating), 472 (making of counterfeit seal), 473 (possessing counterfeit seal) and 474 (forged documents) of the Indian Penal Code (IPC) at the Julkan polce station.

These products were supplied to some high-end restaurants and sweet shops. Dairy farmers from nearby villages had recently met the authorities and informed about the malpractices in the factory. In a press release, commissioner (food and drug administration) KS Pannu said in a similar raid a team of health department, dairy development department and police raided Vishnu Milk Centre, Baghapurana, in Moga district and seized 1 quintal skimmed milk powder, 15 kg detergent powder, 28 quintal spurious desi ghee, 300 litre suspicious curd, 300 kg paneer. A team conducted raid at a dairy farm at Harkishanpura village in Bhawanigarh area of Sangrur and collected samples of spurious milk and milk products. About 1,000 surprise checks were conducted at chilling centres, creameries and milk establishments in remote areas and tankers were intercepted earlier in
the week.

Acting tough against spurious milk and milk products, Commissioner Food and Drug Administration Punjab, KS Pannu has constituted 22 teams to raid dairy establishments across the State to check the prevailing malpractices in quality of food. Pannu said the State has adopted zero tolerance policy with regards to food adulteration, under Tandarust Punjab Mission. He warned those indulging in food adulteration to immediately stop such activities otherwise department will leave no stone unturned to crush such practices. Pannu has warned shopkeepers selling material which is used for preparation of spurious and adulterated milk and milk products to immediately close down such shops failing which they will face dire consequences. A day before, he also asked officers of the department to work hard and fearlessly to curb the menace of food adulteration in Punjab. He has also appealed to the public to assist the Government in stopping adulteration by bringing every case of adulteration to the notice of the Government.