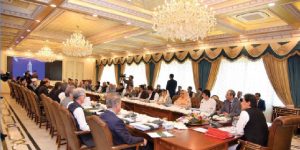 The Constitutional amendment of 2010, called the 18th Amendment has financially empowered Pakistan’s four provinces with a larger share of the federal revenues. It enabled the provinces, Balochistan, Kyber-Pakhtunkhwa, Punjab and Sind, more resources to meet the cost of education, healthcare, rural infrastructure and in other social sectors. These areas have made substantial progress during the past 10 years, but they soon will be denied the much-needed financial resources, if the Constitutional provision for sharing federal revenue is amended. The army has been mounting pressure on the civilian leaders for amending the basic law. It has been much more demanding from the civilian institutions, especially the past 22 months since the Imran Khan led Pakistan Tehreek-i-Insaaf (PTI) has come to power.

For an outsider, it may be difficult to understand why the army or general headquarters (GHQ) is keen for the revision of the 18th Amendment. It does not directly deal with the armed forces, but once it is revised, it would enable the federal government to have full control on its revenue. It would not have any statutory obligation to share its revenue collections to share with the provinces. In other words, the defense establishment could take away its lion’s share from the central budget without much hassle. It is estimated that it takes 18.5 per cent of the expenditure of the federal government. It has quietly managed a 20 per cent hike in its yearly allocation by cleverly hiding the expenses under some other budgetary allocations. These expenses are neither seriously debated in Parliament nor ever audited. With the proposed revision in the 18th Amendment, the funds earmarked or available to the provincial administrations will never percolate down for the uplift of the poor and the down-trodden.

The economic crisis in Pakistan during the past two years, more specifically following the elevation of Imran Khan, cricketer-turned politicians, as the prime minister, has deepened. The amount of money secured from various institutions is being used for the debt servicing. The money received from the overseas Pakistanis working in the Gulf countries too has considerably reduced due to the decline in petrol prices. A large number of Pakistani workers are stranded in the Gulf countries following their en-masse retrenchment. The recent videos on various media channels have live details about the unemployed Pakistani workers seeking help from their embassy in Abu Dhabi, but the mission’s security guards are seen chasing them out.

Amidst this financial down-turn, the army too is facing financial crunch. It has also adversely affected the deep state of Pakistan, an euphuism used for its intelligence agencies, Inter Services Intelligence (ISI) and the front organizations, Jaish-e-Mohammed (JEM),  Lashkar-e-Tayyiba (LeT), Tehrik-e-Taliban Pakistan (TTP), Hizbul Mujahideen (HM) and a few others. The army establishment needs additional funds to keep them functioning.

Pakistan’s terror industry had flourished during the nineties, when the US-led West had liberally funded Pakistan to raise these organizations to oust Soviet Union from Afghanistan. However, the US policy towards terrorism witnessed paradigm change following the September 11, 2001 attacks. The then US president George Bush led the Global War against Terrorism. Interestingly, the then Pakistani dictator, General Pervez Musharraf, promptly joined this anti-terror campaign, but secretly maintained the secret terror camps and harbored dreaded terrorists like Bin Laden. The Pakistani army, however, used these terror camps to create violence in Afghanistan and Jammu and Kashmir.

With the recent US- Afghan Talibans agreement for peace, the Pakistani influence in the war-torn country has reduced considerably. The Afghan Talibans are no more allies of the Pakistan-based terror outfits. Similarly, with the revocation of the Article 370 of the Indian Constitution on August 5, 2019, which had given a special status to Jammu and Kashmir within the Indian Union, the Indian security forces could assert more effectively against the terror activities in the state. The Indian Government has also told Pakistan that there will be more talks unless it dismantles the terror camps. The GHQ is confident that if requirement for the funding could be met even from the internal resources, it could continue its policy of exporting terror to India and Afghanistan.

With the evaporation of foreign funds and the Chinese reluctance to extend money to maintain the terror camps, the army has little option but to prevail upon the provinces to surrender their funds to the army.

The GHQ was expecting that Khan will be able to prevail upon the Opposition parties to revise the 18th Amendment, but he could not measure up to the Army’s expectations. It was decided to induct a senior army officer in the Khan’s government carry out this poliitical agenda. The name of Lt Gen. Asim Saleem Bajwa (Retd), as Special Secretary Information to the Prime Minister was proposed. Khan did not oppose Bajwa’s candidature, though he had to sack his confidant Firdous Ashiq Awan, a PTI veteran, who was holding the twin charge of the Minister of Information and Broadcasting as well as the Special Secretary Information to the Prime Minister.

Asim Bajwa is expected to enlist majority support or revising the 18th. Amendment. The army’s relationship with the country’s main opposition parties, the Pakistan People’s  Party (PPP) and the Pakistan Muslim League-Noon (PML-N) have improved following their  support to the legislation giving extension to the army chief General Qamar Javed Bajwa.

In spite of being under the pressure of the GHQ, Khan could get his confidant, Shibli Faraz, son of famous poet, Ahmad Faraz as the new Minister of Information and Broadcasting. Shibli’s entry in the cabinet, may be, just face saving for Khan, but it serves two purposes; firstly, that Khan wants to bridge ties with the intellectuals of the country and secondly, if he has to go, he would always claim that he was being failed by the generals. The initial reactions, however, are that how the son of a firebrand poet, who had dared the armed forces for its anti-people and anti-democratic role, could become an ally to the “murderers of democracy”.

Among those, who used to meet Ahmad Faraz during his New Delhi visits included Kamleshwar, famous Hindi writer, Raes Mirza, a Urdu scholar, Nishi, a popular  folk singer and many others. Faraz used to have quite a busy schedule in India dismantling the religious and political barriers among people. One of his admirer commented about Shilbi’s induction as a miniter in Pakistan, that what a “misfortune, the man who had the guts to challenge the mercenary army of Pakistan, his son is now a collaborator with the assassins and murderers of the country”.

Faraz is known for his anti-military stand and had to face prison-term during the Zia-ul-Haq regime (1978-88). Later, he left Pakistan. He was in self-exile for next several years. It is doubtful, whether Shibli, a former Pakistani Air Force pilot, could be able to reap any political benefit in the ongoing murkier politics of Pakistan is doubtful. Gen Asim Bajwa would be the real power center, says Najam Sethi, a. political commentator. Shilbi will be a non-descript member of the  cabinet.

Ahmad Faraz was exiled for his poem protesting the attempt of General Zia-ul Haq to silence writers.

so shart ye hai jo jaaN ki amaan chaahte ho to apne lauh-o qalam qatl-gaah meN rakh do
vagarnaa ab ke nishaanaa kamaan daaroN kaa bas ek tum ho, so ghairat ko raah meN rakh do ye shart-naama jo dekhaa to ailchii se kahaa use khabar nahiiN taariikh kyaa sikhaatii hai ke raat jab kisii khurshiid ko shahiid kare to subah ek nayaa suuraj taraash laatii hai
So here then is the condition for your safety: Lay down your paper and pen in the slaughter house Or else, you will be the next target of the archers Shrug off your honor and walk away from it When I saw this proposal, I said to his emissary He really doesn’t understand this lesson of history: That every time the night martyrs a sun Morning arrives with a newly carved one