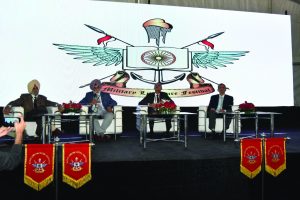 It is not often that you witness the stalwarts of the Indian Defence forces including war veterans, defence experts come together at a single platform to discuss and delve on several key aspects of the past and present in India. So when the second edition of the Three-day Military Literature festival kick-started recently in Chandigarh, it was indeed a huge crowd puller.

From veterans to serving officers with families in tow to civilians, school children, general public-everyone made a beeline for the three-day extravaganza which had something for everyone.

If the food court saw maximum turnout so did the martial arts display, weaponry and the exhibition of Operation Vijay, Military Arts and Photography exhibition, along with Clarion Call Theatre, which too attracted massive crowds.

However, the highlight of each of the three days was the stimulating panel discussions on varied topics which left the visitors completely in awe.

One of the most interesting sessions that took place during the festival was on the topic, ‘Role of Cross-Border Operations and Surgical Strikes’, wherein Lieutenant General DS Hooda (Retd), who was heading the Northern Command when the much-touted surgical strikes were carried out on September 29, 2016, across the Line of Control (LoC), said that the hype around these strikes were unwarranted.

During the session, Retired Lt Gen Hooda said that the initial euphoria over the success of the surgical strike was natural but the constant hype around it was unwarranted. “I do think there was too much hype over it. The military operation was important and we had to do it. Now how much should it have been politicised, whether it is right or wrong is something that should be asked to politicians,” he averred.

In fact, many war veterans citing their own examples on how these strikes are a routine affair seconded Lt Gen Hooda’s views and said that the Surgical Strikes’ was unnecessarily hyped by the Centre to garner political mileage, endangering India’s future defence cross-border responses to inflict enemy damage.

During the discussion, well-known defence expert and commentator Colonel (Retd.) Ajai Shukla cautioned against the recent trend to colour military achievements with political motives. He also underlined the need to maintain operational decency and sanctity of the operations undertaken by the defence forces.

“Success has its burden”, Colonel Shukla said, adding that Pakistan had in fact been emboldened by the strikes as they now know that the Indian government would always be under immense pressure to strike across the border
after each terror attack.

Shukla went on to add that the excessive publicity of the September 2016 strikes, which were an actually reactionary strike to Pakistan’s attacks’ on Indian Army’s Pathankot base and Uri, had set a dangerous benchmark for the Indian political dispensation, which they would find difficult to maintain in the eventuality of future terror attacks.

To a query from the audience, General Hooda said, “In hindsight, it would have been better had we done it(referring to the surgical strikes) secretly. The aim of any such offensive had to be not only tactical but strategic too, which substantially hampers enemy morale”, he said, adding that he could not say with certainty if India had actually achieved that objective in full measure.

Citing the example of the 1981 Israeli air strikes on Iraqi nuclear sites, which had caused considerable damage, Lt. General (Retd.) NS Brar too underlined the need to ensure the long-term impact on the enemy before undertaking any such operation in future.

One of the key developments at the Military Literature Festival was the unanimous call by the veterans, experts during the session on “India’s contribution to the World War I” to moot a proposal to the centre government that orange marigold be declared as a
remembrance flower for honouring the memory of fallen heroes, on the lines of the Red Poppy chosen for by the British government for the same cause.

The proposal, mooted by noted military historian Squadron Leader Rana Chhina, was supported in by all panellists, and it was resolved to formally forward this proposal to the Central Government. The discussion also resulted in a demand for a dedicated war memorial to commemorate the sacrifices of all World War I heroes.

The panellists consisted of Squadron Leader Rana Chhina, Prof David Omissi, Prof. Anju Suri, besides Dr Santanu Das and Lt. Gen. NS Brar, engaged in a discussion that underlined the social and emotional turbulence suffered by soldiers and families during the 1914-1918 War.

Another highlight of the event was the plain-speaking by the former officers and war veterans alike who minced no words when it came to India’s defence strategy and the way ahead.

Defence experts regretted the reluctance of the central government to take inputs from them in drafting the country’s defence strategy and called for brainstorming for a long-term
cohesive combat and defence plan.

At a session on `Evolving Challenges in Indian Defence’, the experts underlined the need for decision-makers to ensure that, along with a booming economy, there should be no shortage of funds for the armed forces.

Lt. Gen. Aditya Singh (Retd) said that China is bringing Artificial Intelligence (AI) in drones, which is equipped with face recognition features. He said that the future of war would be the war of drones and robots along with hypersonic aircrafts. Gen. VP Malik (Retd) said that along with these, the next warfare would also be cyber and space-based.

Col PK Vasudeva (Retd) questioned whether India was spending enough on its Armed forces as compared to China. “In case of any conflicts, I can frankly say that we will not be able to face as blatantly as we have done in 1971 or 1965. What has happened? The army is basically indulging in counter-insurgency, counter-terrorism operations in Jammu & Kashmir and North East. Our soldiers are suffering because there are a large number of casualties because of lack of equipment, small arms, lack of ammunition etc. This is an economy which is one of the largest in the world, but has not been able to provide the
basic minimum equipment to soldiers,” he rued.

Giving the example of Israel, he said that the small country was surrounded by 17 of its enemy countries, but still, the entire region was afraid of them. He regretted that the Indian government was spending crores on statues and bullet trains while neglecting the defence budget. Lt Gen KJ Singh (Retd) said India should focus on punitive deterrents against its enemies so that they think twice before initiating any action against our country. He said that our country needs more credible deterrents such as surgical strikes.

No military gathering would be complete without mentioning the Kargil war and therefore, Kargil was a major part of discussion during a session on “Wisdom of Spies” wherein former RAW chief A S Dulat disclosed that sufficient Intelligence reports pointing to intrusion of Kargil heights were submitted to the central government just ahead of the Kargil conflict.

Participating in a discussion on `Wisdom of Spies’, Dulat said the intelligence reports were shared with the Centre with all the pointers gathered by the Army before the war had started. Dulat, who was with the Intelligence Bureau at the time of the Kargil conflict, said the vital information was shared with the then Union Home Minister, who was also holding the charge of Deputy Prime Minister.

Earlier, Lt Gen Kamal Davar highlighted the importance of putting all the three defence wings physically under one unified command, with convergence in decision making ensured. Cautioning against the current trend of NSA being the ‘Intelligence Czar’ of the country, Davar said it was one thing to have information but totally another to act on all available inputs. He also highlighted the need to invest more aggressively in acquiring language mastery in South Asian languages like Mandarin, Sinhalese and Pashto.

Underscoring the need to adopt the technology, he said in the present times, intellect and technology need to be synchronised to achieve desired ends. “Our covert capability would depend on the marriage of these two aspects”, General Davar added.

Defence experts also called for the development of more indigenous equipment of Information Warfare in the country to build an edge against adversaries in the battlefield.

Participating in a discussion on ‘Information Warfare- the new face of war’, Lieutenant General (Retd.) Vijay Oberoi said despite major advancements in the field, India was still banking on Information Warfare Techniques imported from other countries, which could be very fatal.

Citing an example, he said that GPRS Technology, belonging to the US, did not perform as well during the Kargil War as was expected to. Lieutenant General (Retd.) Oberoi said that at a time when all forms of weapons, whether nuclear, conventional or sub-conventional, were being managed by computers it was not good that we were still banking on equipment made by others.

In his address, Lieutenant General (Retd.) RS Panwar said that while countries like the US, China and Russia had already taken concrete steps to strengthen their Information Warfare techniques, India was still to take an appropriate call on it. He said that like Army, Navy, Airforce, Space and Cyber Domain, it was also a part of modern warfare.

Lieutenant General (Retd.) Panwar batted for framing new doctrines and new structures, besides adequate skill development to give a major push to Information Warfare in the country.

Another session saw experts advocate a level playing field for private entrepreneurs for boosting Defence production in the country in order to make the country self-reliant in military hardware.

Taking part in a discussion on Military Industrial Base and Make in India, Former Chief of Indian Army General (Retd.) VP Malik said that India was importing 14 per cent of the total arms and ammunition globally, which was more than what China and Pakistan import collectively. He said that in 1992, the Defence Research and Development Organisation had chalked out a 10-year plan under which the then trend of 80 per cent import of weapons and 20 per cent export was to be reversed within ten years. However, General Malik said that in 2005 it was found that exports had increased to just 30 per cent and imports had decreased to 70 per cent.

Addressing the gathering, Vice Admiral (Retd.) HS Malhi called for a paradigm shift in Defence Production. Citing the figures, he said that 75,000 crore was the annual import of weapons in the country whereas 25,00 crore was the value of weapons exported from the country. Vice Admiral (Retd.) HS Malhi said that the figure of imports was likely to swell up to 35,000 crore by 2025, adding that this needs to be reversed immediately.