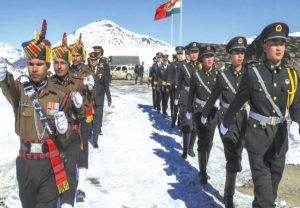 After the 73-day-long 2017 Doklam standoff , no major border incident involving Indian and Chinese troops has been discussed as elaborately as the one that occurred on May 5, 2020, when major clashes involving 250 soldiers from the two sides were reported in the Pangong Tso lake area in the Ladakh region, showing a highly aggressive behaviour on the part of the Chinese. Another such incident was reported on May 9, this time near the Nathu La Pass area in the Sikkim sector, resulting in injuries to at least 10 soldiers belonging to both sides. This resulted in the Chinese side erecting a number of tents and increasing its troop presence in the Pangong Tso area and the Galwan valley along the Line of Actual Control (LAC), indicating that the Chinese were not ready to end their confrontation.

Obviously, it was an alarming behaviour which was responded to by Indian troops with matching build-up. There were indications that the intentions of the Chinese were not pious this time. However, since the two big neighbours do not have a well-defined border, face-offs between their troops are not an uncommon activity along the 3500-km-long LAC, the world’s longest border.  There have been official reports of the Chinese army having transgressed into Indian territory a number of times. Chinese troops indulged in forcefully stopping many times in the recent past the movement of Indian troops on their patrolling duty in the Pangong Tso area. Yet not a single bullet has been fired here and elsewhere for decades.

According to an assessment by Jeff Smith, a Research Fellow at The Heritage Foundation in Washington DC, carried in The Diplomat, a international journal devoted to strategic affairs, “In the vast majority of cases where Chinese and Indian border patrols do meet face-to-face, they engage in a flag ceremony and disengage peacefully. But not always.

Several prolonged standoffs in recent years have attracted media attention and been elevated to the political level. In 2013, Chinese forces objected to the construction of an Indian observation post near the LAC in the Depsang Valley in northern Ladakh. A 21-day standoff ensued. The following year saw a 16-day standoff in southern Ladakh near Chumar after China tried to stop the construction of a water irrigation channel near the LAC. The latter face-off coincided with, and helped to undermine, President Xi Jinping’s inaugural visit to India in September 2014.”

The most serious standoff happened in the summer of 2017 on the Doklam plateau when Indian troops intervened to stop a Chinese military construction team from extending a road into disputed territory in Bhutan. India stood its ground until the two countries reached a mutual withdrawal agreement. The Doklam crisis led to the Wuhan summit between Prime Minister Narendra Modi and President Xi Jinping in 2018, resulting in their more stable bilateral relations.

Interestingly, experts believe the tensions in the area are unlikely to escalate to a level when a military conflict becomes unavoidable. Addressing a recent webinar organised by the Chennai International Centre (as quoted by The Hindu), former National Security Adviser MK Narayanan expressed the following significant view: “The most important thing is not to view every single skirmish as the beginning of another war… Both sides have by and large tried to follow the political parameters and guiding principles we agreed to in 2005. Until such time as the border is finally demarcated, we will face some kind of a problem or the other.”

In his opinion, neither of the two Asian giants wanted a conflict, which would obviously detract them from the role they have been assigned by history to play in the current century, projected to be the Asian century.

Another highly rated China expert, Vijay Gokhale, a former Ambassador of India to China, who retired in January as the country’s Foreign Secretary, said on the same occasion, “I believe, after 2017 (when India-China relations were strained in the wake of the Doklam standoff) two summits have created a certain degree of understanding and trust. It doesn’t mean we have solved every problem. Two leaders together cannot solve every problem in two meetings, but I believe the trust they have created will prevent a mishap from happening.”

All said and done, the ugly behaviour of China in the area of border management  cannot be without reason and that too at a time when China is at the receiving end in the global search for the real source of the novel coronavirus, having caused a global health emergency. It is believed that this was the Chinese way of expressing their displeasure at the 194-nation World Health Assembly proposing an Indian representative — Union Health Minister Harsh Vardhan — to take over as the next chairman of the 34-member World Health Organisation’s Executive Board on May 22.

Beijing’s uneasiness at the Indian representative occupying the chairmanship of the WHO’s Executive Board should be seen against the backdrop of the international community’s worries about the origin of the Covid-19 pandemic. There have been growing calls by world leaders, including US President Donald Trump, to find out how the coronavirus first began to take its toll in the Wuhan city of China and what actions in this regard were taken by Beijing.

It is believed China wanted to convey another message to India through these disturbing developments. China is greatly worried about India and the US coming closer to each other in various fields which may ultimately strengthen India’s position vis-a-vis China in Asia. The US, no doubt, wants India to play a more active and balancing role in the face of China’s aggressive behaviour in dealing with its neighbours as also with regard to issues like the South China Sea, Taiwan and Hong Kong. This, however, does not mean that India will play its cards in the region in accordance with the US scheme of things. Developing relations with the US to comfortably handle situations like the Doklam standoff is one thing. But India values its ties with China too. The two neighbours have a flourishing bilateral trade, which touched $89.6 billion in 2017-18 with the trade deficit widening to $62.9 billion in China’s favour. In 2017, the volume of bilateral trade between India and China stood at $84.5 billion.

However, there has been a decline in their bilateral trade in 2019 and it may get further hit because of the Covid-19 factor. But there are bright chances of their trade volume going up again once the situation becomes normal. According to one estimate, since the Wuhan summit, exports of Indian marine products have seen a 10-fold rise, reaching $1 billion in 2019, while agricultural products such as non-basmati rice, rapeseed meals, fish meals, tobacco leaves, etc, have gained access to Chinese markets. Efforts are on to ensure that Indian products like okra, soya bean, bovine meat and dairy items are also exported to China in a big way.

The economic and strategic compulsions are, therefore, bound to make India and China to always find a way to de-escalate border tensions of any proportion. While they cannot allow their economic growth interests to get seriously hurt by developments like border skirmishes, the Chinese are also believed to be ready to make any sacrifice they can to realise their ultimate dream of becoming a future super power. The fact, however, remains that the US and other major powers may do all they can to prevent China from achieving this disturbing objective, as it may dangerously disturb the balance of power in Asia, sending unnerving messages across the world.