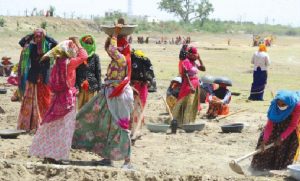 According to Joint Secretary, Ministry of Housing and Urban Affairs, Sanjay Kumar, “the government is considering extending its flagship jobs program in villages to workers in cities left unemployed by the pandemic-induced lockdowns”. Initially, the programme, when approved, may be rolled out in smaller cities. He added that “The government has been considering this idea since last year,” he said. “The pandemic gave a push to this discussion.”

The government has recognized the significance of MGNREGA and an all-time high amount of 61,500 crore was allocated under MGNREGA for the financial year 2020-2021. An additional provision of 40,000 crore has been made for this programme under “Atmanirbhar Bharat Abhiyan” to provide employment during the difficult period arising out of Covid-19 pandemic.

The Centre for Monitoring Indian Economy in its recent report has said that person-days of work generated under the Mahatma Gandhi National Rural Employment Guarantee Scheme (MGNREGS) slowed in August 2020 after rising continuously for three straight months from May to July 2020, as per the official dashboard. The person-days rose to 570 million in May 2020 and peaked at 640 million in June 2020. In July, 390 million person-days were generated. However, only 149.7 million of such days were reported in August 2020. But, still, the person-days under MGNREGS during April-August 2020 at 1.9 billion is 44 percent higher than in the year-ago period. The deceleration in August 2020 numbers can be attributed to heavy monsoon rains in certain areas and return of tens of thousands of migrant workers back to the urban centres. Also, the authorities seem to have become a bit cautious on spending in view of the increased budget funds required due to surge in numbers.

However, though it is praiseworthy that the government is considering bringing MGNREGA to urban areas where unemployment has skyrocketed, it is important to plug gaps in the existing scheme. Highly placed sourced told that the 21st Meeting of the Central Employment Guarantee Council, constituted under Section 10 of the Mahatma Gandhi National Rural Employment Guarantee Act (Mahatma Gandhi NREGA) held under the Chairmanship of Union Minister of Rural Development, Agriculture and Farmers’ Welfare and Panchayati Raj, Narendra Singh Tomar through Video-Conferencing because of the ongoing pandemic. The minister reportedly told delegates that “Mahatma Gandhi NREGA is one of the largest employment generating schemes which provides alternative employment to the people in rural areas. The Programme has 261 permissible works out of which 164 types of works are relating to agriculture and allied activities. The Government has accorded priority on creation of individual assets and assets on water conservation and irrigation which would help agriculture sector”.

With a view to achieving transparency and accountability, the Government has been taking all steps to achieve 100% payment of wages in the bank account of Mahatma Gandhi NREGA workers and accordingly emphasis on social audit of works. For the Financial Year 2020-21, 61,500 crore has been allocated which is an all-time high. Additional provision of 40,000 crore has been made for this programme under Atmanirbhar Bharat Abhiyan to provide employment to the needy workers during this difficult period arising of COVID-19. Under the programme, a sum of 28,000 core has already been released to the States/UTs.

Minister of State for Rural Development, Sadhvi Niranjan Jyoti, too highlighted the good works done under Mahatma Gandhi NREGA by providing employment to rural people during these difficult days. She stressed on more irrigation and water conservation activities under the scheme so that the farmers get benefitted. Little doubt that allocation under this programme has been enhanced because the government’s flagship programme to alleviate rural poverty by generating employment in rural areas, was gasping for funds. During 2019-20, MGNREGS was allocated 60,000 crore. While it was expected that there would be reasonable increase in funds allocation, but actually there was decline in allocation. During 2018-19, the flagship programme of the Union government had got 61,084 crore (revised estimate).

The budgetary allocation for MGNREGS had increased to 61,084 crore in 2018-19 from 34,000 crore in 2014-15. Except for 2014-15, in all years since then, actual expenditure has been more than the approved budgetary allocation. According to the non-profit Centre for Budget and Governance accountability, “The allocations have actually declined when adjusted for inflation.” Little doubt that the Centre was running out of funds for the MGNREGA scheme because by January 2020, more than 96 per cent of the allocated funds had already been exhausted by the States. Reason the Mahatma Gandhi National Rural Employment Guarantee Scheme had for the first time in five years, been allocated less budget that the previous year’s actual expenditure. In the Budget 2019-20, MGNREGS was allocated 60,000 crore as  against 61,084 crore during the previous year.

The overall allocation for the Ministry of Rural Development has increased by 5,200 crore than last year. The total allocation for last financial year, was 1,17,647 crore,  the same as was proposed in the interim budget. In the 2018-19 Budget, it was 1,12,404 crore. But the fact remains that though the allocation for the ministry has been increasing over the years, its share in the total Budget has decreased to 4.4 per cent in 2019-20 from 4.7 per cent in 2018-19.

It is said that at times the figures don’t tell the story. The government had claimed that the allocation of 61,084 crore for MGNREGA was all time high. A release by the Press Information Bureau had claimed that the Government of India had allocated an additional 6,084 crore at the stage of revised estimates to MGNREGA. It had claimed that this brings the total allocation to the scheme to 61,084 crore in 2018-19, making it the highest ever allocation. There has been a remarkable increasing trend in the budget allocation of the Central Government and release for the programme from 32,977 crore in financial year 2014-15 to 55,167 crore in the financial year 2017-18. This is a clear evidence of the increasing faith of the people in the programme. The MGNREGS witnessed a record expenditure of 63,644 crore in 2017-18 including state share, the highest since the programme was launched. This year is going to be even higher.

The issue of creation of durable assets was very important. The 60:40 ratio was mandated at Gram Panchayat level often leading to non-productive asset being created simply because 60 per cent had to be spent on unskilled wage labour in that Gram Panchayat. Without diluting 60:40 principle, the first big reform was to allow 60:40 at the District level rather than at the Gram Panchayat level.

In spite of this reform, the ratio of expenditure on unskilled wage labour to overall expenditure remains higher than 65 per cent. This has enabled a new thrust on durable assets that generate incomes. It allows the flexibility to undertake only those assets that are productive.

The generation of person days each year is a reflection on the thrust for wage labour. Since 2015-16 to 2018-19 so far, the demand for work has been high with an average 235 crore person days generation annually in the last 3 years and even this year being no different. These numbers compare very well with almost every year in the past except 2009-10, which was a year of severe drought.

The focus is on the diversification of the livelihoods with multiple sources of income for them to come out of poverty. The expansion of the women Self Help Groups movement under DAY-NRLM from less than three crore to nearly six crore membership has happened during the same period during which MGNREGA was being fully reformed to deliver employment, durable assets and sustainable livelihoods. The generation of payment within 15 days has moved up from 26 percent in 2014-15 to 91 percent in the current, confirming the governance reforms that have made this possible.

Admittedly there are gains in incomes of individuals but in view of more expenditure in comparison to budget allocation, at least 15 states have negative balance currently. The highest negative balance is in case of Rajasthan at 620 crore, followed by Uttar Pradesh with a negative balance of 323 crore.