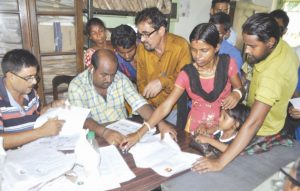 She threw the sari end on her shoulders, as the knocks on the door of her dwelling intensified…accelerating by the second. Till, of course, she was there, on the muddy-filthy patch, just outside the door. Looking about hassled and hyper, as her ageing husband sat back on that filth, with just about lisping, “Papers…they want to see papers to prove that we were born here!”

“What!” she could barely quiver.

“To prove you and I belong to this land, otherwise we will be thrown out…our names are not in that list of citizens Do not know what would happen to us?”

“But don’t you know last year’s floods ruined all our belongings, boxes washed away and so…”

“Now…the whole village knows but not the sarkaar (government)! We are ruined …we would be thrown into the sea or jungles or killed.” Her husband couldn’t utter any further as by then he had collapsed.

Hundreds and thousands of Assam’s residents are slowly dying every single day, even before getting deported. After all, in the latest draft of Assam’s National Register of Citizens, names of 40 lakh people are not included. Yes, 12 per cent of Assam’s population has been left out.

The sheer shock of being off the citizens’ list would be enough to kill. Though till date no health-related research has been conducted on these 40 lakh residents of Assam, to study the rising numbers hit by heart attacks or diabetes or blood pressure levels, but this could be a very important finding. Also, it would be significant to know if the sarkaar of the day has appointed healers and health care givers for those falling ill or slowly dying because of the severity of the sarkaar – induced shockers.

Though those excluded from the NRC are given a second chance to prove their Indian citizenship but this in itself is a very tedious process. Does the establishment expect these marginalised people to be keeping papers and records of their births or of their ancestral backgrounders? Tomorrow, if the NRC were to conduct citizenship surveys in other states of the country, civil war could spread out. If lakhs and lakhs of human beings were to be unaccepted as Indian citizens, then what happens to their lives. Are we going to deport lakhs because they cannot prove that they belong to this land?

To quote Professor VK Tripathi, who until very recently was teaching Physics at IIT Delhi. He also runs the Sadbhav Mission and has been focusing on the Assam crisis. “Son of the soil is not the one born in the soil of the nation, but the one who lives in the soil, works in the soil, feeds the nation with food and comforts and shares ups and downs with the people around. Be they Hindus or Muslims, speaking Assamese, Bangla, Bodo, Hindi or any other language, all working class masses are true sons of the soil, children of India. They are born here, their forefathers lived here for millennia, they laid their sweat and blood in the soil here and contributed half of their earnings to the nation. The piece of land where they live belongs to them. They never grabbed or robbed any one’s property, but fallen prey many a times to the exploiters and oppressors. They have the fundamental right to live in the motherland with freedom and dignity, much more than those who rule, dictate and exploit.”

However, their percentage share in land and assets is far less. Only 7.9 per cent of them in cities and 5.8 per cent in rural areas are in the formal (organised) sector. For Hindus, these figures are 23.1 per cent and 12.3 per cent.

“Rest Hindu and Muslim masses are in the low income informal sector… 36 per cent people in Assam are below the poverty line (against 26 per cent All India average). In districts where Muslim population is above 45 per cent, with the exception of Dhubri, the percentage of people below poverty line is higher (Dhubri 28.6 per cent, Goalpara 60.3 per cent, Barpeta 50.19 per cent, Kaila Kandi 43.79 per cent, Karimganj 48.23 per cent, Nagaon 38.96 per cent, Marigaon 80.14 per cent).

The annual growth rate of wages in Assam during 1991-2000 has been negative (-0.12 per cent) while for the country it was +3.36 per cent. To this if we add the fear of insecurity (heightened by massive riots like Nellie massacre of 1983 that killed 2800 people), Assam can’t be a lucrative destination for working classes from elsewhere. In fact, in last two decades sizeable people from Assam have migrated to Kerala as many locals from Kerala moved to Middle East…”

Tripathi added that Partition of India can’t be made an excuse to attack the citizenship of working classes. The partition was merely the division of ruling authority — few states came to be ruled by the Muslim League and remaining by the Congress.

The NRC must look afresh the drop out cases in view of this amendment. The government must strive to make India-Pakistan-Bangladesh borders porus for the working classes as these classes were never given their rightful due in British India or new born nations…Indians going abroad get the citizenship of that nation after working for few years. Many countries give full citizenship to the children of illegal migrants born there. Here we are dealing with people whose forefathers, for millennia, lived here and served this land. They deserve at least the rights we demand for NRIs in other nations, concluded Tripathi. 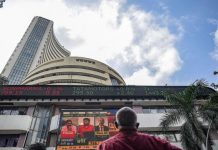