A 24-year-old student of at the Post Graduate Institute of Medical Education and Research (PGIMER), Chandigarh was found hanging from a ceiling fan in his hostel room on February 26.

Posted with the radiology department, Dr. Krishnaprasath Ramasamy, who was among toppers in his batch was reportedly ‘feeling low’.

He was pursuing Doctor of Medicine (MD) at the PGI. No suicide note was recovered from his room, said police.

According to other junior doctors, Krishnaprasath wasn’t able to cope up with the pressure and wanted to go back to his home in Tamil Nadu.

The incident came to light when Krishnaprasath did not report for duty on the morning of February 26. Other doctors tried to call him but he didn’t respond to any calls. The doctors then went to his room which was locked from inside. The guards had to break open the door and found him hanging from the ceiling fan. 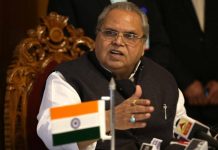