When she lived in Dubai, the late Sunanda Pushkar mingled with Indian cricketers, who visited the Emirate. She rubbed shoulders with them at parties and loved being involved in the world of cricketer-celebrities. She wasn’t fond of the gentleman’s game. But given the ‘Sunanda in Cricket Wonderland’ dream-world that she lived in, she cajoled her husband (then boyfriend), Shashi Tharoor, a Union minister in the UPA government at that time, to purchase a team in the Indian Premier League (IPL) in 2010.
It led to a tragedy and controversy. As Tharoor’s friends bid for the Kochi team, it was disclosed that Pushkar was given a stake in the franchise in perpetuity and for free. Tharoor resigned as a minister due to allegations that this was a bribe. A few years later, Pushkar died in Suite 345 of the Leela Palace hotel in New Delhi. Now, it has emerged that she was murdered and her husband may be the prime accused. A day before she died, she told her friends that she would expose the corruption in the IPL. Was there a connection between Dubai, cricket, IPL and Pushkar’s death?
It is in the realm of possibility. Evidence that was unearthed over the past few years indicates that the IPL (and T20 cricket) has adversely affected the cosy, comfortable and closely-knit network of mafia, bookies, punters, gamblers and errant players who fixed matches. It has shattered the world that these actors rebuilt after the match-fixing quakes in the late 1990s and early 2000s.
To understand what has happened in the past few years since the IPL’s first season in 2008, let us go back to a match in the IPL-5 season. At a small pub in Saket (south Delhi), a dozen individuals, aged between 19 and 25, sat around several connected tables. Fifteen minutes before the match, they were on their mobiles. From the snatches of conversations, it was evident that they were placing bets on who will win, what will be the score of the team batting first and which batsman will score the maximum runs. This was normal illegal gambling in cricket.
As the match began and progressed, apart from the wagers on the bigger outcomes, they were talking about runs that will be scored in a particular over (every over), sixes and fours in a specific over, and even the number of no-balls and wides in an over. They even jabbered about each batsman and bowler — will a player score between 10 and 20, 20 and 30 or more than 50, and will a bowler give five, 10 or more runs in his over. This showed different dimensions of illegal betting; it was different from the practices of the past three decades.
First, it proved that the gamblers had more options. Earlier, you could place bets on four-five major outcomes; in the IPL, the number stretched to almost 100, or may be more. Second, it busted the much-believed myth that a Dubai-based cartel, mafia or syndicate controlled illegal betting. There was no way that such an organisation, or organisations, could provide the odds for every ball, over and batsman. It had to be done by the regional or city-based bookies.

Third, the incident confirmed that illegal betting was democratised, fragmented and competitive. Each bookie (the one who takes the bets), at least theoretically, was capable of setting the odds for different outcomes. If this was the case, then each bookie could ‘fix’ players and matches to earn extravagant profits. The punters, or big betters, could do the same. If there wasn’t a mafiosi in control, anyone who had the money and access to players could manage a ‘fix’.
Finally, thanks to the IPL, a shorter format of 20 overs compared to one-day matches (50 overs), even the nature of match-fixing has transformed. It is no longer critical for the bookies and punters to ensure that a team loses — for which they had to buy five-six key players — as they did in the past. What is crucial in the IPL is knowledge — the information that odds for a particular outcome, small or big, will change during a game. For that, one needs to fix just one-two players. In a sense, hedging is more important than fixing. We will explain later why this is so.
These changes were visible from the investigations by the Mumbai and Delhi Police into the IPL-6 (2013 season) match-fixing scandal that involved several cricketers, including former Team India player S Sreesanth and dozens of bookies and punters.
Gambling galore
One can’t be sure which came first, the chicken or the egg, the crowds or increase in the number of gamblers. But one can reconstruct the underlying trends that led to the radical transformation of illegal betting and match-fixing in the IPL. The advent of T20 cricket created immense excitement due to its fast pace; each over, and each ball, could turn a game on its head. The IPL took it to another level due to the marriage between cricket, money, entertainment and glamour.
In its first season, the IPL attracted big crowds, especially those who sat in front of TVs. It attracted the gamblers who saw opportunities to make money. Technically, the chances of a ‘fix’ were higher. There were dozens of matches that were irrelevant to the teams because it didn’t matter who won or lost due to their positions on the points’ table. The logic was that it would be easier to persuade the players of these teams to ‘give’ away the games.
Former Delhi Police commissioner Neeraj Kumar, who was in charge of the 2013 investigations, said that one of the reasons behind corruption in the IPL was the inclusion of young players, some of whom had never played first-class cricket, in the IPL teams. Enamoured by the glitz and riches, they were susceptible to overtures made by the illegal betters. These cricketers could easily be bought by paying Rs 40-60 lakh per match, as was the case with the two Rajasthan Royals bowlers, Ajit Chandila and Ankeet Chavan, who were accused of fixing.
More crowds meant more gamblers, especially in India where people bet on anything and everything, like the official death toll in a natural calamity and whether the next car that passes by will have an odd or an even number. More opportunities implied more bookies as they recognised the chances to mint money. After IPL-1, the illegal gambling market exploded. 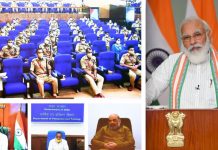