Dipalle Parmar on Art
I am a big fan of the works of Sudhir Patwardhan, Gieve Patel and Nilima Sheikh. However, at the moment I would like to bring your attention to a much younger artist, Dhruvi Acharya. This Mumbai-based artist is one who weaves tales onto her canvas. Her colours and images are so understandable. She talks about women, urban realities and the violence that often holds the two together. Her works are more like illustrations. Her’s is a simple and effective medium with strong content. Her work at the Mumbai airport is especially captivating.
Parmar Is A Pune-Based Architect, Interior Designer, Artist And Writer
[box]

Shinie Antony on Books
Susan Visvanathan’s book The Seine At Noon is a summertime stroll in Paris, about Stefan, the son of immigrant Jews from Kerala, and Frenchman Jacques who have been deserted by women. There’s a loony dog with a loaf of bread and a woman with a “tremendous capacity to stare into windows and want things”. This is the story of one river and two friends, the telling rippled in verse.
‘This book is the story of a river, two friends, summertime in Paris and a loony dog’
Antony is the author of  Kardamom Kisses
[/box]

Suryakant Sawhney on Music
I once ventured out to this terrific gig at blueFROG, Mumbai, by The Lightyears Explode, a Mumbai-based punk band. They play antiromance masala punk with the occasional Punjabi groove thrown in. Their sound is raw, tempo is quick and their energy on stage is vicious.
Sawhney is a vocalist and songwriter with Peter Cat Recording Co
[box]
Manish Tiwari on Film
Nostalgia is like a Chinese box, where each generation longs for the time gone by. Woody Allen uses

this premise in Midnight in Pariswhen the protagonist, an American screenwriter, slides through time to Paris’ past. He rubs shoulders with F Scott Fitzgerald, Ernest Hemingway, Gertrude Stein; and steals Picasso’s mistress. My favourite was Adrien Brody playing Salvador Dali with relish. All of this set against the excellent music of Cole Porter, Josephine Baker and the French can-can!
Tiwari is the director of Dil Dosti Etc
[/box]
Veena Arora On Food
There is a new place in town that people must visit: Auma. It is a Thai and Italian cuisine restaurant in Vasant Kunj. I recommend this place because of its sheer excellence. They do not compromise on quality. Which is why they have a Thai chef, and boys trained extensively in Italian cuisine, handling the kitchen. It is a fine-dining restaurant, with a beautiful interior, lovely music playing in the background and candles adding to the atmosphere. My favourite dish remains the pizza, which is the best I’ve had in Delhi. It is also very reasonably priced.

Arora is the senior consultant at The Spice Route, Hotel Imperial, New Delhi 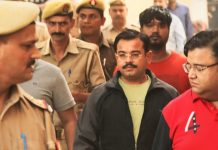