A massive fire broke out in the slums of Delhi’s Tughlakabad area on the intervening night of Monday and Tuesday.

Around 30 fire tenders were rushed to the spot to douse the flames.

A call was received around 12.15 am regarding the fire incident, a fire department official said.

The fire has been brought under control but around 1,000-2,000 shanties caught fire, an official said.

No casualty has been reported so far.

Simple langar to be prepared at Gurdwaras during Sahibzadas’ martyrdom fortnight... 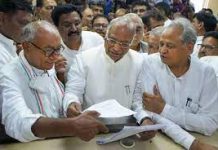