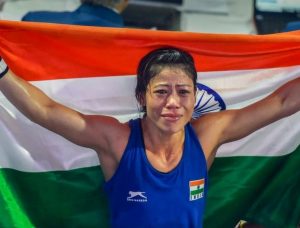 India’s MC Mary Kom beat Hanna Okhtova of Ukraine with unanimous 5-0 decision to win her record sixth gold medal in World Boxing Championship at Delhi on Saturday.
Another Indian boxer Sonia Chahal lost to Germany’s Gabriele Wahner in 57 kg final on a 1-4 split decision.
Mary Kom the most successful pugilist in women boxing entered the event with five gold and one silver Medal under her belt. She last won a World Championship medal in 2010 in 48 kg category.
Before this championship Mary was tied with Irish girl Katie Taylor on the number of medals. There are five gold medals and a Bronze in her kitty.
Mary now drew level with men’s six time world champion Felix Savon in boxing World Championship History.