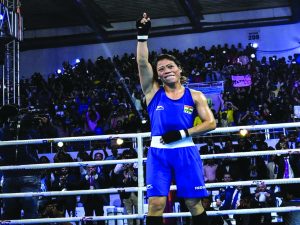 Four years ago, it seemed that time was up for Manipuri after Pinki Jangra beat her in the 51kg qualification trials for the 2014 Glasgow Commonwealth Games. But by winning her sixth Gold across World Championships, she has equalled her stature with that of Cuban great, Felix Savon. The Cuban great ruled boxing in the 1980s and 1990s.

Why she lost against Pinki Jangra in the 51 kg qualification trials for the 2014 Glasgow Commonwealth Games is that there was no 48 kg category and she had to compete a catch in the higher 51 kg category.  Higher weight category naturally means competing with those boxers who are taller than her and have bigger frames and have mighty punches.

Mary Kom’s frame and height make her a natural winner in the 48kg weight category. All her World Championships  Gold medals have been won in 48kg or lighter categories. But there’s no 48kg weight category in several big multi-sport events such as the Olympics. That’s the reason she has to move to the 51kg category to participate in these events. It’s a big challenge as she’s up against taller boxers who are used to absorbing bigger punches. That’s the challenge she faced at the London Olympics in 2012, when she won bronze.

It goes to her credit that she has has always defied the odds. She has busted gender stereotypes and earned accolades by setting up new benchmarks. She has overcome the odds posed by the lack of resources and poor infrastructure that hold back so much athletic talent in India. In doing so, she has single handedly brought India on the world boxing landscape. She has also reinforced women’s sport by winning consistently with exceptional determination and grace. Mary Kom, who is now 35 and a mother of three, has had a good 2018, winning her maiden Commonwealth Games gold medal earlier this year. She extended that form in Delhi and cemented her place in the history of the World Championships with an overall haul of seven medals, including silver on debut in 2001.

A bronze medalist at the 2012 London Olympics, Mary Kom’s victory has triggered further speculations and expectations that she will switch to the 51 kg weight class in the pursuit of a medal at the 2020 Tokyo Olympics.  In fact after her famous victory she had tears rolling down her eyes and famously said that she would need good wishes of all to do well in 51 kg category in future. As a Member of Parliament (Rajya Sabha) and idol for many upcoming women boxers, she has a full schedule, and will be aware that it will take all she has to fight with younger and stronger rivals in a higher weight category.

A movie on her achievements when Priyanka Chopra essayed the role of Mary Kom has already immoratilised her and she is being hailed as ‘Magnificent Mary’ by the International Boxing Association (IBA). Her rise from a humble background to be an international role model has inspired many budding sports persons not only in boxing but also in all other sports. The most inspirational aspect of Mary’s character is her pursuit of sporting excellence
despite being a six-time world champion, an Olympics medalist and a mother of three. And her best is still coming. She wants to fight at the 2020 Tokyo Olympics and come back with a medal. She knows it would be tough and she would be 37 and would again be fighting in a higher weight category. But she’s shown enough mattle already. For Mary Kom perhaps world “impossible” does not exist in her dictionary.

Mary Kom, who won a historic sixth world title, was also adjudged the best pugilist of the 10th World Women’s Boxing Championships. The AIBA panel which chose the Indian, as the best among the competitors was a richly deserved honour for Mary Kom, whose endurance, perseverance and the never-say-die attitude is unparalleled in history of sports.

Mary Kom recalled her participation from beginning “at that time, boxers from fewer countries had participated. It was not even included in Olympics. The competition is much tough nowadays and considering the fact, our results here (one gold, a silver and two bronze medals) were great.” About her win, she said, “ this one was very special. I was under pressure and had to change my weight category also. I won my last Worlds gold in 2010 and then the change of weight for Olympics happened. Pressure was something I always felt.”

Mary Kom’s evolution as a boxer has been spectacular.  She said that “in 2001, I was young, inexperienced, in fact I would say I had no skill. I was only relying on strength and stamina to pull through. Just following my instincts at that time. But now I have the experience to ensure that I didn’t exert myself unnecessarily. I don’t want to get hit anymore, I like to win bouts without getting struck and this is what I largely managed to do this time. No wasting of efforts. I have become calculative.”

“I can put it down to the hype and pressure maybe. At that time, women’s boxing was not that well known. People came but it wasn’t the same buzz. This time I saw people in the stands chanting my name and it overwhelmed me,” she said. “There was this huge buzz and on the final day it completely overpowered me, emotionally. That’s why I broke down, I couldn’t help it,” she explained.

“To be the first woman boxer to achieve all that I have achieved, I am quite pleased with how I have done. Everyone has dreams, I am no different and I am glad that I am able to live my dreams,” said the seemingly ageless powerhouse.