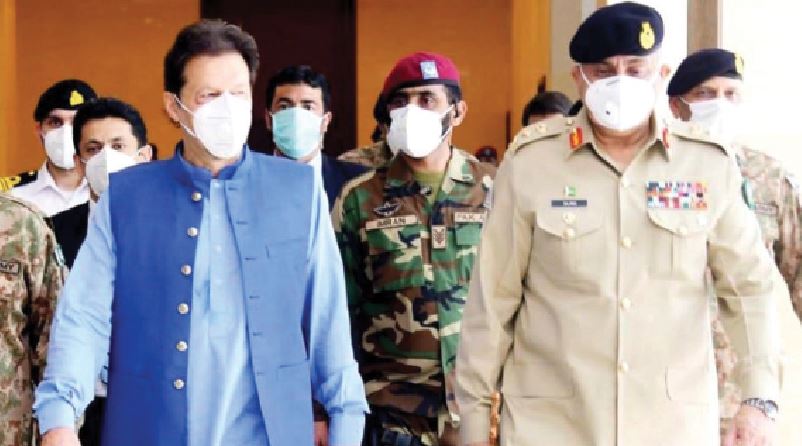 Apart from installing a ‘hybrid’ government led by cricketer-turned politician Imran Khan and his political outfit Pakistan Tahereek-e-Inaf (PTI), the Army is expected to have an opposition loyal to the military establishment.

Khan could come to power with the help of the power of the uniform and its secret service, Inter-Service Intelligence (ISI), which successfully rigged the polls in 2018. The army is now preparing to form a loyal opposition with the help of the Pakistan People’ Party (PPP), some regional outfits and also be engineering a split in the Pakistan Muslim League-Noon (PML-N).

The pre-dominant role fo the uniform had begun on October7, in 1958, when the then civilian President Iskander Mirza abrogated the Constitution and imposed martial law. However, Mirza too was deposed by the then army chief, Ayub Khan, who ruled till 1969 till he was replaced by General Yahia Khan. The army’s stranglehold continued in Pakistan even after the secession of Bangladesh in 1971.

Except a few brief interregnums of civilian rules, the country has been yearning for genuine freedom and elected governments. The intolerance towards media remained even under the civilian regimes; and efforts were also made to manage judiciary. The judiciary has been validating successive coups under one or the other pretext. The judicial order of a three-member special court headed by Peshawar high court Chief Justice Waqar Ahmad Seth, could be an exception, when the court sentenced General Musharraf, the last military dictator, to death for high treason over his imposition of emergency rule in the country. The court further had ordered, “If the former army chief was found dead before the execution, his corpse should be dragged to a crossing in Islamabad and hanged for three days. The order, however, has been set aside by another court.

The establishment has found the ‘hybrid’ government is better than imposing a direct rule. In a bid to crush challenges to the real power holders in the state, now a ‘loyal opposition’ is being evolved. It has been necessitated following the campaign of the Pakistan Democratic Movement (PDM), an alliance of 11 parties comprising the country’s opposition parties, PML-N, PPP and other nine regional parties. It is being led by Fazal-ur-Rehman, the chief of a powerful religious outfit, Jamiat Ulema-e-Islam.

The PDM appears to have weekend following the PPP distancing itself from the agitation and openly criticizing the PML-N. Its chairman, Bilawal Bhutto, has enlivened the Sindhi sub-nationalism for consolidating its strength in the province on the unfair treatment in allocating inadequate water supply from the Indus River System Authority. Since Punjab gets maximum water from the authority, it may also cause trigger off the old Sindhi-Punjabi animosity. The Sindhis, who are known for their elephantine memory, have never forgiven the open connivance between the three times Prime Minister, Newaz Sharif, who leads the PML-N, with the then army dictator General Pervez Musharraf against the PPP leader and mother of Bilawal, Benazir Bhutto. She was eliminated in a bomb blast believed to be a handiwork of the army’s intelligence wing, Inter-Services Intelligence (ISI). Bilawal’s maternal grandfather, Z.A. Bhutto, the first elected Prime Minister of Pakistan, had deposed by a Punjabi general, Zia-ul-Haq, and later hanged through a sham judicial trial.

Apart from installing a loyal opposition, Bajwa’s stooge, Imran Khan, is going to regulate even social media. Those uploading programmes on the social media would have to obtain license and if they violate the new regulations, they would be facing imprisonments and huge fines.

The decision to have new press laws was taken following the incident of May25; in which the ISI officers had stormed the residence a senior journalist, Asad Toor, at an apartment in Islamabad, and he was mercilessly beaten up. The Khan government instead of getting the culprits arrested for assaulting a journalist on May 25 has decided to impose new media regulations. It caused so much discontent that Hamid Mir, a well-known journalist and anchor, threatened that the journalists would be forced to reveal the misdeeds of the army generals, if the killings and harassments of media persons is not stopped. He even cautioned that if the “repression” and murder of journalists continue, “We would not hesitate to reveal the generals private life”. He has also exposed the case of the ISI chief General Faiz Hameed, who had received gun-hot injuries. His wife had opened fire at him, when he was found with a call girl. Hameed had to escape naked and later, he was treated at a hospital; under a false narrative that he was being attacked some enemy agent. He even called General Mushrraf, a ‘rat’, who has gone in exile for avoiding trial. With these outbursts, the establishment is apprehensive that more and more disclosures about the generals might soon be revealed.

Meanwhile, the ISI is continuing its repressive actions against journalists. The prominent among them include Saleem Shahzad, whose body was found “entangled” in the Upper Jhelum canal, but none has so far been arrested. Many journalists such as Raza Rumi barely escaped an attack, and Ayesha Siddiqa, Taha Siddiqui and Gul Bukhari, now mostly live outside Pakistan. In April 2014, Hamid Mir too had escaped death, when some unknown gunmen fired at him in Karachi. The culprits were never found.

The colourful life of the army dictators, Ayub and Yahia are already being circulated. Yahia Khan’s intimacy with Akleem Akhtar, a pretty woman lovingly called ‘general rani’, is already well-known. Her daughter is in live-in relationship with an Indian chief minister. The sex-pursuits of his predecessor, Ayub Khan, is remembered as ‘a flamboyant dictator’. He used to swim with pretty models at a London joint, where they were allowed to swim, but they had to be in the nude. A picture of Ayub in the bathing pool carrying bikini-clad Christine Keeler on his shoulders was an inspiration for the pleasure loving people.

Thus, Bajwa and his crony, Imran Khan, have embarked upon a unique experiment in the history of democracies, when instead of imposing martial law; the army rulers control the state institutions through a sham democracy and its institutions.

Congress and corruption ‘made for each other’ : Naqvi