Despite poll boycott by two major mainstream parties – PDP and NC – civic body polls were held in Jammu and Kashmir. Though, the turnout in the Valley was poor yet people reached at polling booths to use their right of franchise.  Now results of these civic polls are out and surprisingly BJP have emerged victorious on many seats in militancy infested  Kashmir also.  However, in net shell Congress have succeeded in winning seats in all the three regions.

These elections are held after the gap of 13 years. After the byocott announcement of two major political parties National Conference (NC) and People’s Democratic Party (PDP), for the first time in the history of Jammu and Kashmir there was direct contest between two national parties, Congress and the BJP. Results indicate that BJP have succeeded to open its account in Kashmir also while many independents have also won in good numbers.

However, BJP suffered a humiliating defeat  in the Ladakh region where the Congress won all 13 seats of the municipal committee. Not only this, the Congress also won five seats in the neighboring Kargil municipal committee. However, eight seats have gone to independents in Kargil. These results indicate that people have neglected the BJP, who lost  the Ladakh Autonomous Hill Development Council (LAHDC) of Leh last month. This is pertinent to mention here that in 2014 Lok Sabha polls people of the region have elected Thupstan Chebang, who was the BJP candidate.

BJP is happy over its victory on many seats in militancy infested Kashmir areas, specially in the South Kashmir region where BJP had no political base. The senior BJP leader in Kashmir  Darakhshan Andrabi, while talking to the Tehelka over phone, expressed happiness over party victory on many seats in Kashmir valley. She said,’’ this is victory of th policies of the BJP and our leader Narendra Modi. I personally thank the voters for expressing faith on us and also for particepating in the elections process despite threats from certain sectors.’’

However, BJP have suffered a setback on many important seats and areas in Jammu region which is considered to be its stronghold. BJP had won all 25 seats from Jammu region in the previous assembly elections and after that BJP had formed government with the PDP. In Jammu region Congress have snatched many seats from the BJP.  Panthers Party of Bhim Singh have also regained ground in Udhampur region while large number of independents have also won seats in Jammu region. Experts feel that may create problem for the BJP in Jammu region.

BJP emerged as the single largest party in all six municipal bodies of the Kathua which was recently in the news after the rape and murder of a teenage girl. Out of the total number of 80 wards, the BJP won 34, Congress 19 and independents 27. In Jammu Municipal Corporation (JMC) the BJP have won 43 of the 75 seats. In Muslim majority Kishtwar municipal commiitee Independents bagged 10, Congress 2 and BJP one seat while Congress swept the Banihal municipal committee.

In Srinagar MC only eight votes were polled and Bashir Mir emerged victorious with securing seven votes in ward 74 while Congress’ Nazia won from ward 16 where she secured 49 votes out of total polled 56 votes. NC leader Farooq Abdullah is MP from Srinagar seat whose party didn’t particepated in these polls.

Counting of votes for the 79 municipal bodies in the state was held on Saturday. Polling for these were held in 4-phases, however there was very low turnout in the valley while Jammu experienced good polling.  A total of 3372 nominations were filed for 1145 wards in the state. Of the 598 wards in Kashmir, 231 candidates were already elected unopposed, while there were not even a single candidates in 181 wards.

These results indicate that people in Jammu region are not much happy with the performence of the BJP and its main rival Congress is emerging stronger again. Both PDP and the NC boycotted these polls alleging that BJP is trying to revoke Article 35A and 370 which give special status to the state. However, BJP had alleged that both the parties were fearing defeat in the elections. Now, in the last phase elections will be held for the panchayats on non-party lines. 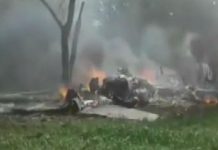