Putting an end to the speculation surrounding appointment of a new chief minister in Goa, BJP chief Amit Shah announced on Sunday that Manohar Parrikar would continue as the chief minister of Goa.

However, Shah said that there would be certain changes in the cabinet and other government departments.

“After discussion with the core team of the party in Goa, it has been decided that Chief minister of Goa Manohar Parrikar will continue leading the state government. However, there will be changes in several departments and the Cabinet of the state government will be made shortly,” Amit Shah said on Twitter.

Since the day Parrikar was shifted to AIIMS hospital for treatment, tension emerged among the political ranks in Goa, especially among the allies of BJP.

Previously reports suggested that the BJP had launched efforts to find a replacement for Parrikar after the Congress, the single largest party in the 40-member Goa Assembly, staked claim to power.

Shah had earlier deputed Ram Lal, B L Santhosh, and Vinay Puranik to reach out to allies to take stock of the political situation in the state. 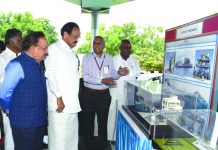 It’s the Blue Economy in India that is picking up fast!