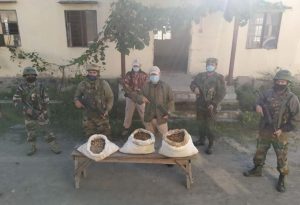 Security forces on Thursday seized nearly 72 kg of brown sugar worth Rs 287 crore in a major operation undertaken in Kamu area in Thoubal District of Manipur.

The operation was undertaken by joint teams of Assam Rifles and Manipur police.

“In a major ops undertaken by security forces, @official_dgar & Manipur Police seized nearly 72 kg of Brown Sugar (worth 287 Crs) from Kamu in Thoubal Dist, Manipur. The security forces remain committed in their efforts to curb the drug menace in NE India,” PRO Shillong, Ministry of Defence said in a tweet.

Punjab CM condemns attempt being made to convert gurdwara into mosque...