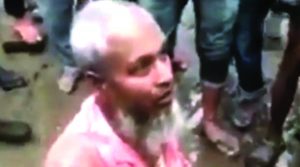 A Muslim man was allegedly beaten up and forced to eat pork by a group of people for allegedly selling beef in Assam.  Shaukat Ali, 48, was assaulted at the Madhupur weekly market in Biswanath district on April 7. He was hospitalised.

A video of the incident went viral on the social media. It showed a dazed Ali surrounded by a crowd demanding to know where he had come from and whether his name figured in the National Register of Citizens that intends to weed out illegal migrants.

Sahabuddin said sale of meat of any kind was never an issue in the bi-weekly market of Madhupur. “Our father started running a rice-meal eatery at the Madhupur market every Thursday and Sunday more than 40 years ago. I took over from him and later let my younger brother Shaukat Ali ran it,” said Sahabuddin.

The district authorities, he was quoted as saying by a media outlet, assured him that action would be taken within 24 hours. On the night of April 8, the police arrested two people identified from the video of the assault that was uploaded on social media. On April 7, the day of the assault, the police picked up five people, including two market committee leaders, in a bid to disperse a mob. They were let go after signing a good behaviour bond under section 107 of Code of Criminal Procedure.

Sahabuddin, who lives in Kalakati village 15 km from Biswanath Chariali, admitted that the eatery has had beef on the menu for decades while letting customers bring home-cooked meat too. “No one told us we could not sell meat. They could have served a notice instead of

attacking my brother, and could have taken action officially if we did not comply,” he reportedly said, adding that the mob mostly comprised people from adjoining areas.

In his complaint, Sahabuddin reportedly said some members of the mob threatened to force-feed pork to his brother, who stays in the town behind the local police station.

District Deputy Commissioner Pabitra Ram Khaund said the authorities swung into action soon after the complaint was lodged and arrested two people connected with the assault. “We took the victim to the hospital and provided treatment. He is now out of danger.”

Khaund said the district administration had summoned leaders of local organisations, including the All Assam Minority Students’ Union, for a meeting toward normalising the situation. “We have made it clear peace must be maintained under any circumstances with the Lok Sabha election a few days away,” he stated.

Additional Director General of Police (Law and Order) Mukesh Agarwal meanwhile said the police had organised a joint vigil by people of both communities to maintain peace. “High visibility and domination of security forces are in place.”

Biswanath Chariali falls under the Tezpur Lok Sabha constituency, which went to the polls with four other seats in Assam on April 11. Ten candidates are in the fray but the contest is expected to be between Minister Pallab Lochan Das of the BJP and retired IAS officer MGVK Bhanu of the Congress. The constituency is currently held by the BJP’s Ram Prasad Sarmah, who was denied ticket by the party.

Ali, who owns a food stall, claimed he was force-fed pork by the assailants. “We have also heard about that. It is a matter of investigation. A man arrested in connection with the incident was being questioned,” Superintendent of Police Rakesh Raushan was quoted as saying. Ali claimed he had been selling beef at the market for over three decades.

The group also beat up 42-year-old Kamal Thapa, a contractor, for allowing Ali to sell beef dishes. The SP said raids were on to apprehend others involved in the incident. In August last, a man was beaten to death and three others were critically injured when villagers assaulted them on suspicion of being cattle thieves in Biswanath district, which is part of the Tezpur Lok Sabha constituency.

There were huge protests over the incident. All India United Democratic Front’s wing United Democratic Student Front (UDSF) Hojai district committee staged a massive demonstration at the district headquarter at Sankardev Nagar in Hojai, in front of the deputy commissioner’s office. The demonstration was held in protest and demand the arrest of the culprits involved in the vicious attack on Ali.

UDSF Hojai district committee president Atikur Rahman and general secretary Habibur Rahman along with their members handed over a memorandum to deputy commissioner of Hojai district which was received by ADC Gauri Shankar Das. In the memorandum, UDSF has demanded immediate apprehension of the culprits involved in the merciless crime and also demanded stringent punishment for those involved in this brutal incident.

Through Hojai DC, one copy each of the memorandum has been forwarded to chief minister of Assam, director general of police, Assam and the human rights organisation. UDSF has further stated that if stern actions are not been taken within 24 hours, they will be obliged to hold massive demonstration lawfully all over the state.