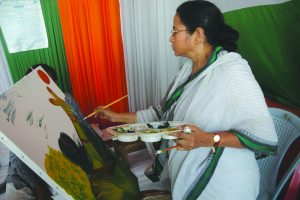 This book dwells largely on the political graph of Mamata Banerjee and what’s made her a strong political leader of the country. Perhaps, her childhood paved way for her to be drawn towards politics as her father, Promileshwar, was an active Congress supporter. To quote from the book “who allowed his office to be used for party meetings. Local Congress leaders would come home regularly for tea, much to Mamata’s delight. She would listen to endless tales of the Indian freedom struggle and their revolutionary ideas. She would willingly prepare home-made glue to paste their posters. It was during this impressionable age that Mamata learnt about both the Congress and the communists.”

With that take off, the various political turns and turbulences are mentioned in great detail. Mamata struggled and remained focused till of course she was successful in defeating the three-decade-old Left Front government in 2011. Emerging as one of those formidable regional leaders who could today even take on the right-wing rulers of the day.

After one has read through this book, her political journey does come across as tough but indications that she would be fighter-activist seemed to hold out right from her childhood. “One day during the daily shopping run she noticed that a neighbour’s careless flicking of a beedi had burnt a passerby’s shirt, and tempers had flared in the locality. While the other onlookers stayed mum, she narrated the incident to her father without trepidation and pointed out the culprit,” the book says.

And along the expected strain right from the student days Mamata’s activism paved way for political battles. In her memoirs she says that she would often take her books to the protest sites, and if arrested, study in the police lock up. “Mamata has famously been referred to as a ‘street fighter’, a nomenclature that is not unjustified. ‘Fighting for our lives on the streets of Calcutta was something we did, 330 out of 365 days in a year. Everyday there were protests, meetings and slogan-shouting. Everyday there was violence.’ she says. Under Subrata Mukherjee’s leadership, the Chhatra Parishad organised a slew of protests between 1978 and 1983; Mamata played a central role in almost all the agitations whether it was against Jayaprakash Narayan or Farooq Abdullah.”

And as I have already mentioned this book is laced with details to Mamata’s political graph. And it indicates two prominent factors–her determination to be a political fighter. Also, she is equally determined to be remain secular, trying her utmost to keep the right-wing communal factions at bay, away from wrecking communal strife and havoc in her State.

She comes across as a formidable force. Not to be bullied by any of the right-wing rulers of the day. In fact, her quest has been to keep communal forces away from her State and also to reach out to the marginalized sections and also to the minority communities.

She is one of those handful of chief ministers who has gone ahead to take all possible precautions that communal clashes do not take place in her State.

“Mamata has been so cautious that in 2017 she refused to allow Durga Puja idol immersions on Muharram, the Muslim day of mourning. ‘Some people will try to create trouble on Hindu-Muslim grounds. Every religion is ours. But if there is a problem while a procession is passing a puja pandal, we will all be affected.’”

Interestingly, though this book carries only nine photographs of Mamata, but two of those photographs speak volumes for her secular approach. And in today’s India, these two particular photographs relay so much positivity and that vital bonding and respect for the other. We Indians do need a leader who is secular not just whilst delivering speeches but actually and truly practices secularism.

This book is excellent in terms of details to Mamata Banerjee’s political life. But there seems little space given to the personal life of Mamata.