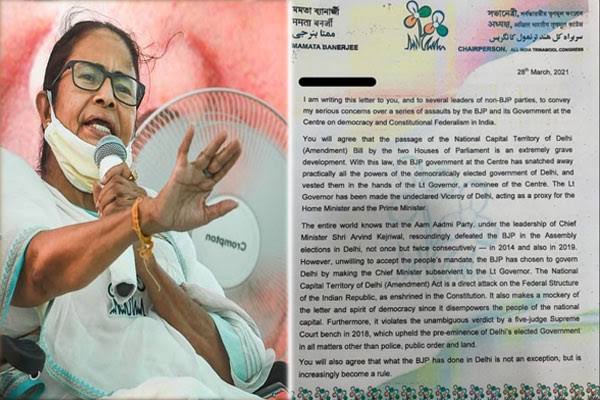 In the middle of West Bengal Assembly Election, TMC Supremo Mamta Banerjee on Wednesday wrote letters to top Opposition leaders, asking them  to unite against the BJP and defend democracy in India.

“I am writing this letter to convey my serious concerns over a series of assaults by the BJP and its government at the Centre on democracy and constitutional federalism in India,” Mamata Banerjee wrote in the letter.

Accordingly to TMC chief “BJP is trying to establish a ‘one- party authoritarian rule’ in the country. In her three page letter to all those leader,  she has written in detail how BJP is misusing central agencies.

Mamta Banerjee highlighted in her letter “I strongly believe that the time has come for a united and effective struggle against BJP’s attacks on democracy and the constitution”.

She also said “ once the assembly election has over than all the parties should come together and present a credible alternative to BJP.”

Mamata Banerjee also wrote about the lack of funds given to state governments as well as the shrinking space for them to voice the needs of their people.