Thackeray, who is heading a Shiv Sena-NCP-Congress coalition took oath as the Chief Minister of Maharashtra on Thursday at Shivaji Park in Mumbai in a sprawling ceremony attended by Madhya Pradesh Chief Minister Kamal Nath, DMK chief MK Stalin, MNS Chief Raj Thackeray, Chairman of Reliance industries Mukesh Ambani among other top politicians and industrialists from Maharashtra and rest of India.

Apart from Uddhav Thackeray, six other ministers – two each from Shiv Sena, Congress and the NCP – also took oath on Thursday.

Uddhav Thackeray held a cabinet meeting after swearing in as chief minister where his government announced to sanction Rs 20 crore for the development of Raigad. 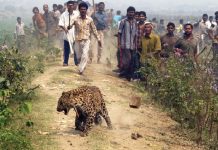