At least six persons were killed and several others were injured after a private bus rammed into a truck on the Pune Bengaluru highway near Satara on Thursday morning.

The incident took place at around 6 am in the morning.

According to the reports, the travel bus, which was carrying 40 passengers, crashed into it from behind. Due to the impact, the front portion of the bus was completely damaged. 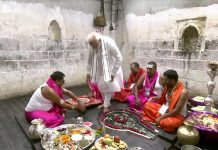