A Maharashtra court on September 14 issued non-bailable warrants against Andhra Pradesh Chief Minister N Chandrababu Naidu and 14 others in a 2010 case related to an agitation by them against the Babli Barrage on River Godavari, an official said.

NR Gajbhiye, Judicial Magistrate First Class, Dharmabad Court in Nanded District, issued the warrants against Andhra CM Naidu and his cabinet colleagues, Irrigation Minister DU Rao, Social Welfare Minister G.Kamalakar and 12 others directing the police to produce them in the court by 21 September.

The Telugu Desam Party strongly reacted to the news about the court order and alleged that Prime Minister Narendra Modi is behind the conspiracy.

The incident took place when Naidu was the leader of opposition in the state and along with 40 legislators organized a massive protests over what it termed the “illegal constructions” of the Babli Barrage project by the Maharashtra government allegedly to divert Godavari River waters from Telangana region of the then undivided Andhra Pradesh.

CM Naidu and 14 others have been charged with the Indian Penal Code offences, including assault or criminal force, to deter public servant from discharge of duty, voluntarily causing hurt by dangerous weapons or means, act endangering life or personal safety of others, criminal intimidation among others.

N Lokesh, CM Naidu’s son and state Information Technology Minister, said that his father and other TDP leaders would attend the court. “He fought to protect the interests of Telangana. He even refused to seek bail when he was arrested,” Lokesh added. 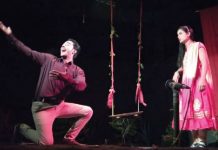