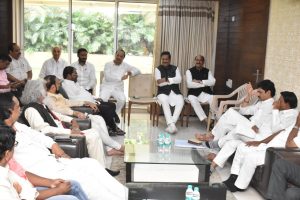 Shiv Sena also held a meeting with its 56 MLAs in Matoshree, where all MLAs demanded Uddhav Thackeray to take over as next Maharashtra Chief Minister. Uddhav apprised the legislators of the government formation process and told them that the formation of Sena-led government is in the final stages.

Congress leader Manikrao Thakre told reporters that, It is almost final that the next Maharashtra Chief Minister will be from Shiv Sena as NCP has never demanded the position of Chief Minister.

Earlier in the day Shiv Sena leader Sanjay Raut said that Maharashtra will have a Shiv Sena Chief Minister for a full term of five years.

While speaking to reporters, Raut said that his party will get the Chief Minister’s post for a full five-year term.

“The time for offers has ended,” Raut said in response to a question on reports that BJP had agreed to share the Chief Minister’s post with Sena.

“Shiv Sena will not side with the BJP, even if offered ‘Lord Indra’s throne’, he added.