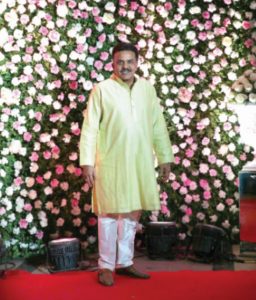 What is your take on Devendra Fadanavis as chief minister?

As Maharashtra chief minister, Devendra Fadnavis has completed more than four years in power, very little has been delivered out of his endless list officially taken from the BJP’s book of tall promises. The CM’s poor decision making is no more a secret. But his decisions have been causing great inconvenience to the common people time and again.

Do you mean that the state government is not doing enough for people?

From increasing crime rate to the never-ending plight of the farmers, the Fadnavis -led state government has disappointed everyone. In a time span of eight months, the farmers and the Adivasis have marched for days walking kilometres for their long-standing demands. They have returned twice with nothing but empty promises. But the CM and his government seem to be in no mood to help them in any way. The government has brought the food producers of Maharashtra to a state wherein they’re fighting for their own food. As many as 10,000 farmers have committed suicide under the BJP Govt’s watch. What kept the CM so busy that he has failed in fulfilling his promise of benefiting 80 lakh farmers in Maharashtra with a loan waiver of 34,000 crore because the government has only been able to benefit 39.78 lakh farmers with a waiver of 16,498 crore so far.

Everyone in the Congress has been slamming the demonetisation and GST. What impact did these policies have on the people of Maharashtra?

The misery of people is not limited to the rural parts of Maharashtra. Those working in the real estate business in the city are still recovering from the serious blow of demonetisation and implementation of GST. The Mumbaikars have lost their purchasing power which is why more than five lakh flats are lying unsold in the city. Small-scale industries — which gained grounds and functioned efficiently for years in areas with huge slums like Dharavi, Kurla, Charkop, Malvani and Malad — have witnessed a 50 per cent shutdown. With absolutely no employment generation, more than 25,000 Mumbaikars lost their jobs during the dark period of demonetization and implementation of GST.

As a Mumbaikar, don’t you find a single work of the government that makes you feel good?

Not at all. Mumbaikars are paying an awful lot as the gap between what is being promised by the CM and what is actually delivered continues to widen. One of the biggest problems the Mumbaikars are battling today is that of the Mumbai Metro. At first the chief minister announced the construction of the Metro 2 line connecting Dahisar in the northwest with Mandale in Mankhurd in the east.

The construction of the first section of the line, i.e. Metro 2A connecting Dahisar and D.N. Nagar which commenced in November 2016 was expected to be completed by the year 2019. With 3 years in hand, the construction work has not been completed by even 50%. The condition of Metro 2 line connecting D. N. Nagar and Mankhurd via Bandra is no better since the construction work is stuck due to a pending court case. With the status of Metro Lines 5,6,7,8 and 9 nowhere near complete, Fadnavis has announced three new lines, i.e. Line 10 between Gaimukh-Shivaji Chowk (Mira Road), the Wadala-CSMT Mumbai Metro 11 Line and the Kalyan-Dombivali-Taloja Metro 12 Line.

I want to ask the chief minister why is he so desperate to hit the headlines and promise development whereas his work in the past four years has only been embarrassing. The roads have been dug up across the city for constructing metro and with zero progress in the actual construction work, Mumbaikars are spending hours on the highly congested roads. They are not being able to move. Mr Chief Minister, is this something to be proud of or to be ashamed of?

The Chief Minister of Maharashtra has failed miserably in doing his job. As he has been only pretending to “work efficiently” for the past four years, there is absolutely no room for the Mumbaikars to even breathe let alone live peacefully. I want to alert the people of Mumbai and Maharashtra that Mr. Chief Minister can land at their doorstep with the BJP’s book of tall promises yet again asking for votes anytime soon.

Why are you upset with electronic voting machines your demand to replace EVMs with ballot papers means you are questioning credibility of EVMs ?

Yes, I am questioning the credibility of EVMs now because it’s an open secret that the BJP goons rigged the election results in 2014 by hacking the EVMs electronic voting machines… Congress is not against using EVMs or Technology but it’s unfortunate that these machines are being used for vested interest by the ruling BJP. One more important thing, the Election Commission is defending EVMs I strongly feel that it has no right to do so if EVMs are being used for manipulating the poll results. Recently, we organised a protest demanding that they should be replaced with ballot papers and will continue with our demands.

Can Cong reinvent and recreate its lost magic?